Kokendake, placed on the central-eastern area of the city, is the original core, with the historical center located on Mount Kokendake, registered as a Ulethan Heritage Site. This old town like area, places at a height of 100 to 150 m on the sea level, overlooks the rest of the newest urban development, and is often considered as the "Terrace of Sainðaul". At the foots of Kokendake there are two wide buddhist temple areas, also part of the historical and cultural heritage. 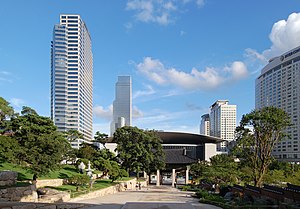