This past week, the Pride festival took place in Prague, along with the most popular festival event, the Pride march. I'm not a fan of the march, I don't like crowds and loud music, but there were also some interesting cultural events, exhibitons and debate panels. Besides Pride, there is one other queer festival in the city, and that is the Mezipatra Film Fest, taking place in Spring. That's when I started thinking: what is the queer life in Odrava like? 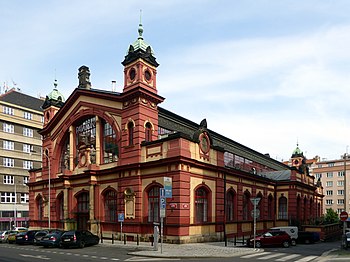 For once I didn't get to draw inspiration from my home country, the Czech Republic.

The gay community in Prague is relatively small, and it's not a huge generalization to say everyone in the community knows each other (likely because they have hooked up - hence the recent HIV epidemic in the city.) There aren't that many gay bars and venues, and their numbers aren't growing - many gays (or most that I know) prefer to stay away from them, now that there are dating apps and different ways to connect with other gay men. Homosexuality was decriminalized in 1961, but people were regularly imprisoned for gay sex even in the 1980s (oppressive totalitarian communist government.)

Drabantia didn't suffer through the 41 years of totalitarian communist regime like former Czechoslovakia did, and homosexuality was actually decriminalized in 1968. In that year, the glory days of Nové Město were long gone - the streets were dirty, public spaces neglected, infrastructure outdated and buildings worn out. The municipal government didn't care for this part of the city much, safety regulations and crime were often overlooked. In these rough conditions, along Kastilánská ulice (Castellan Street) the Odrava gay scene was born.

Unofficial bars and clubs started popping up in the basements and backyards of buildings, as more people moved into the neighborhood seeking freedom and tolerance. The community took care of itself - there were (mostly unlicensed) barber shops, medical clinics, law offices, it was like a separate city within itself. It didn't take very long until the government officials noticed this. Suddenly, police raids became common on Kastilánská. The police were looking for drugs, illegally sold alcohol, violated safety hazard regulations, businesses not paying taxes properly, or just any other reason to beat a few people up and put them in jail for a while. The locals had to learn how to stand up for themselves.

Fast forward to the 1980s. Most of the businesses on Kastilánská are now legal. Gay and lesbian rights are now getting more attention in the mainstream media, and most people now know homosexuality is neither a medical condition nor a choice. The art of drag was imported into Drabantia, and many clubs are now including drag shows as a part of their program. Kastilánská became a tourist destination - it definitely was a one-of-a-kind location in Drabantia, if not Central Uletha. Jan Horák describes life in Kastilánská in the 1960s - 80s in his book, Byl to náš svět ("It was our world.")

With great popularity came problems, such as rapid drug use or prostitution. The Addiction Prevention and Treatment Center in house no. 11 opened in 1991, the Rainbow House, an LGBT+ shelter in no. 41, two years later. Gentrification took Nové Město by storm in the late 2000s, and the gay neighborhood wasn't spared. A New Town Gay is what you would call the stereotypical crossover between a hipster and a homosexual. Same-sex marriage is by the way legal since 2011.

What to see nowadays? Let's start at the western (lower) end of the street. Right at the corner of Kastilánská and Nezávislosti, there is the café Revolta, where you can pay in virtual currency. Umakart club is where the legendary drag performer Grace d'Vine started. If you're looking to open your chakras - and more - the Astra Massage Club in no. 21 is exactly for you. Right next door you'll find the club Peach Fuzz, where disco-themed parties are held every Friday. U Dvou šípů is one of the most popular bars where you can meet new people, and the club Spirit across the street belongs to the oldest establishments in the area - it's been around since 1976.

How are LGBTQ+ people treated in your country? Both OGF and real world. Is there a gay neighborhood, festival, event? Please comment below and stay tuned for the next post, arriving in two weeks.

Hi, I am actually glad that you made your post on this issue. It's been a while since i wanted to say something about the LGBTQ rights in Broceliande. It's now done in the wiki article. Brocéliande is very liberal on this matter.

As for real life, well Paris is a very nice place to be gay (maybe more complicated in the popular suburbs outside of the city). The Gay Games just ended in Paris and went pretty well (both for sports and parties). Gay life in Paris used to be concentrated in Le Marais but it is less and less true. Le Marais has become too expensive for bars and cultural places, it is being turned into a luxury tourists oriented area (a bad news as it looses its soul even if some people are fighting against this tendency). As a consequence, gay life is spreading across the city almost every where but mainly in the north east (3, 11, 19, 20). Tparigo (talk) 16:50, 13 August 2018 (CEST)

Ah, gentrification. Lovely. I guess that's what would be happening in Odrava right now as well, only the upper class gays stay in the New Town.

Sidenote, I have filled in Mariana Novotná-Leroy as the ambassador of Drabantia in Broceliande on the foreign relations page.

I like the way you developed the New Town area. There are as much POI as should be in places like this. And your story about gay-life reminded me that I should finally specify how LGBTQ+ situation looks in Demirhanlı Devleti but it wouldn't be such a happy story (but also not being to harsh, the country is not supposed to be an OGF Islamic dictatorship but also I don't want to rewrite my personal stance about this question because it's kinda complicated). Anyway I think writing about porn (especially that morally disguisting like Czech Hunter as you described) is a little bit too much for a site with low required age like OGF. Some thinga ahould rather stay private.

O can't say much about gay-life in Warsaw, since it's not for me but it's still very well hidden except for one or two official clubs and it's not rather going to change in the next few years. The only thing worth to notice is that there were never that much openly gay people working for the government as it is these days (which is funny when you know the ruling party official standpoint against LGBTQ+ in the past). --Rüstem Paşa Discussion 18:35, 13 August 2018 (CEST)

Thank you! I feel like Poland is very ambiguous in some matters. It is a conservative religious country, where people consider abortion a murder, but then you see the mayor of Słupsk is gay and trams in Poznań are decorated with rainbow flags during Pride week. It's odd. I still like Poland though --Eklas (talk) 15:30, 14 August 2018 (CEST)

It's complicated but not ambigous. Poznań has a very liberal mayor who has seen this action (which got very negative response in the country, some tram drivers refused to decorate the trams and even sued the mayor) as a good chance to get the government into fury. Also the Pride parades are seen as negative by the most of the society. People are willing to accept normal gays like Słupsk mayor but the Pride marches often attract people who are truly the cancer of the society - BDSM maniacs in their sleeping costumes, nearly-naked exhibitionists, radical feminists, communists etc. It leads to the view that the LGBTQ+ society is very dissolute. It's a grist to the meal for radical right-wingers and even some gays and lesbians have very negative attitude towards the parades because of that. --Rüstem Paşa Discussion 18:27, 14 August 2018 (CEST)

Calling people a "cancer on society" is language that dehumanizes people, not unlike calling them cockroaches. The metaphor implies that they should be rooted out and destroyed; I hope that's not what you mean to say. Demuth (talk) 8:25, 15 August 2018 (CEST)

No, I'm far from destroying anyone. What I want to say they bring nothing good to the society while presenting themselves like described above and that behavior should not be promoted nor even shown in the public. What they do at home is their choice. I have a tendency to use strong words because that language dominated Polish public debate for a long time as well as I tend to sound pompous when I'm writing (I try to fight with that habit). --Rüstem Paşa Discussion 11:33, 15 August 2018 (CEST)

Stockholm surprisingly has no gay ghetto or particular part of the city where gay life is centered - the bars and clubs and restaurants are kind of spread all over the place, and it feels to me, not all that plentiful. Despite being liberal with mostly strong legal protections for LGBTQ people, including marriage and adoption, we gays are not terribly visible. I think this has much to do with Swedish culture, which has traditionally stressed not standing out. Of course there are still rainbow flags all over the place (in many store windows, for example), a number of prominent LGBTQ cultural figures (actors, authors, female athletes, artists, etc.), virtually all of the mainstream political parties support LGBTQ rights unreservedly (not the Christian Democrats; nor the anti-immigrant far-right Sweden Democrats) and there are a number of fairly prominent LGBTQ politicians. It's a very secure place to be gay, I'd say. The big exception to the relative invisibility is Gay Pride. It's a week of lectures, workshops and evening parties and club nights, ending pretty much in the parade on Saturday - the parade attracts the biggest crowd of any event each year in the city I'd say - some 45,000 march in it and upwards of 450,000 come to watch (the population of the city is only 950,000 although the metro area is 2.3 million). Of course, having moved to Sweden as an adult, I have a bit of an outsider perspective albeit having lived here 20 years. And I've been gone long enough from the U.S. to not really be able to describe LGBTQ life there anymore. Demuth (talk) 9:50, 14 August 2018 (CEST)

That's great. I wish politicians here supported queer rights openly, but then again, our politics are a tragedy in general, so no surprise there. Prague Pride seems to have a similar attendance as the Stockholm one, I think this year we've had about 40,000 people marching. --Eklas (talk) 15:30, 14 August 2018 (CEST)