Difference between revisions of "User:JoJoBa/Sandbox/Lilian Islands"

Motto:
"Posłuchaj piosenki tubylców."
Listen to the song of the natives.Subdivision of

The Lilian Islands or simply Lilian (/lɪlɪæɒ̃/; Lilinonnu-itak:りりのぬーたとじ; Lilinonnu-itak (Latinized?): Lilinonnu Tatoy; Lechian: Powiat Liliowych Wysp; Franquese: Comté des îles Lilian), formerly the Catastar Islands, are a semi-autonomous powiat (county) within the province of AR045-10, in the country of Ardencia. It is composed of 3 main and 12 smaller islands, all part of the greater Lilian Island Chain. It was historically inhabited by the indigenous Amnadaska and Lilinonnu tribes, of which the Lilinonnu ruled the islands for about 1300 years. It wasn't until 17xx when the Lechians arrived at what is now the city of Pakaj, and colonized the whole area.

The capital city is Horari, located on the Uoluma Island, which recently got the role as the county seat in 2009. The largest city is Ledlów (Porokotan) on Yomi Island which served as the capital for about XX years. The powiat is divided into 22 gminas (commune) and one gmina miejska (city commune).

The name Lilian Islands is an Ingerified version of the native name used by the native population - Lilinonnu Tatoy. The first name is a combination of two words: lili - which is the native name for the lily flower (Lilium family), and nonnu - the word for flower. Tatoy is the word for one or more islands. The islands are known for being home to many different species of lilies, and the lilies were, and still are the islands' symbol.

The Lilian Islands are a powiat (county) within Ardencia, and as such is divided into lower divisions, all operated by the central Governourate of the Lilian Islands. Lilian is divided into 22 gminas (commune) and one gmina miejska (city commune). A gmina miejska has more power compared to a gmina and a locality can achieve such rank by it's importance and size. Currently the only such division is Ledlów (Porokotan) which is also the largest city in Lilian.

There are also 4 historical regions which aren't official subdivisions, but are often used by the government, organizations and the citizens.. They are: Uoluma, Yomi Hora, Yomi Cupka and Wotoi wa Udedema.

Below is the list of all subdivisions in Lilian:

The flag of the Lilian Islands is the regional symbol of the islands, used since 2001. It represents the islands, the government of the county and the people of Lilian Islands. It was the winner of the 2001 'Vote for our flag!' poll (Lilinonnu-itak:うこ わ あこん ぽとじ ある; Lilinonnu-itak (Transcripted):Uko wa akon potoy-alu!), with winning about 80% of the total votes. 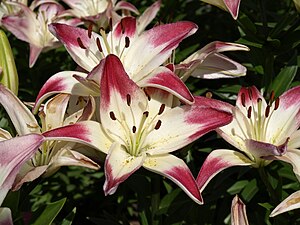 It is inspired by the Ardentic Banelia Lily flower (also known as Lilium Ardenticum Banelica) which is native to the islands, and is considered as the national symbol, as well as the symbol of peace, beauty and elegance. The flower is typically red on the outer parts of its petals, and white in the inside.

The flag of the Lilian Islands.

The flag is composed of a white circle inside a red background, a simplified version of the lily flower's colours. The red also symbolises the struggle of the native population throughout it's history, while the white represents the peace between the native population and Lechian and Franquese colonizers, as well as the rising sun of Hetuku, which is a symbol in the islands' folklore for a bright future.