Difference between revisions of "Vang Ngat"

Vang Ngat (Kuehongese: 邦咯 Vâng Ngát) (location) is a Kuehongese state located on the northern coast of Kuehong. It is largely comprised of Vang Ngat Island and its neighbouring islets. Established as a capital for a brief time in the 12th century AD and later considered part of the state of Bo Sinh, the state was formed in 1696 when it was split away from Bo Shinh to become a new administered area under Ingerish rule, known as the Ingerish Administration of Vang Ngat, then later reverted to Bai rule. As of 2016, Kuehong has a population of 4.7 million, making Vang Ngat being one of the most densely populated states in Kuehong. The capital of Vang Ngat is O-man, the economic centre of the state and the seat of the state government, though unofficially Vang Ngat is a city-state and hence it is its own capital.

Vang Ngat today has become one of the world's most significant financial centres and commercial ports. It has one of the highest Gross Domestic Product per capita among the Kuehong states and is considered a high-income economy. Compared to the states formally part of West Kuehong, it has a rather heterogeneous population and highly diverse in ethnicity, culture, language and religion. Aside from the Bai and Kue ethnic groups, Vang Ngat is home to significant Ulethan communities as well.

Vang Ngat Island is believed to have been settled since 7000 BC. It came under the direct control of the Kue Kingdom since its establishment, though it was poorly administered as the Kue rulers did not pay much attention to the island. It became a key base for pirates travelling from the Asperic to the Ardentic. Vang Ngat later hosted the administrative capital of the kingdom Khang Ninh (慷宁) from the 12th to 13th century AD, when the then emperor Tào Phật Mã (曹佛马) was forced to flee to the north due to a rebellion. As the capital and under Tao's reign, it developed into a prosperous port. After the death of the emperor's grandson Tào Càn Phù (曹干扶), when the kingdom plunged into chaos, Vang Ngat was stripped of its status as capital and was neglected, to be retaken by pirates and fugitives. 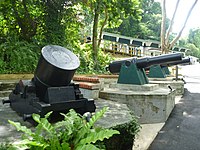 Mortars and guns that remained at Ingerish Fort Khang Ninh

After Bai's colonisation in the 15th century, Bai decided to turn Vang Ngat into a key trading outpost to Uletha and to the Asperic Ocean. Vang Ngat became a hub for migrants especially of those from Uletha. Later in the 17th century, the Ingerish Ardentic Company arrived on the Muinon Peninsula in hopes of establishing trade relations in the area. By this time, the Bai Empire has been weakened greatly due to an economic recession and unable to control all of its ports and initially welcomed the Ingerish, who promised to help Bai defend the island. However, the Bai governor of Basheng Wu Zhaohao 吴赵豪, who feared the Ingerish takeover of the island, managed to lobby the Bai government to 'drive out the Ingerish'. The Ingerish, on the other hand, refused to move out due to resources in the area, in spite of coercion and eventually threats made by Bai. Managing to gather enough troops, the Ingerish troops launched a war against the Bai forces in 1696.

The state parliament of Vang Ngat in 1910, which remains preserved.

After being ceded to Ingerish forces, it was renamed King Earnest Island after the then Ingerish monarch Earnest II, and led by Vang Ngat's first Ingerish resident Raffles Swettenham. In 1712, the Ingerish Administration of Vang Ngat became part of the Ingerish Ardentic Settlements, alongside other Ingerish-controlled ports and areas in the region such as Phong Thinh, Lim Dat, Namthinhvuong and Yen Luan. Under direct Ingerish rule, the town of O-man (then called Earnesttown) rapidly developed and absorbed the surrounding villages. Mines were later set up on the island for tin. Vang Ngat's rapid development, however, saw the rise of social problems, such as inadequate sanitation and public health facilities, as well as rampant crime. The settlements were eventually put under direct Ingerish rule in 1832, but despite beefing up the police presence on the island, it has failed to address the social problems largely due to corruption. The island eventually returned to Bai's rule in 1846 after the 150-year lease, as the Ingerish decided not to continue administering the island due to the large problems it has to face and faced to tackle. Till today, several Ingerish-style buildings could be seen in Vang Ngat, especially the State Parliament. By the time Vang Ngat was returned to Bai, despite the social problems, Vang Ngat had evolved from a transient colonial outpost into a major entrepôt and a major source of tin for Ingerland. An agreement was later signed allowing the Ingerish to keep control of the mines and export it, while Bai gets 30% of the profit from the venture and regains the control of the island.

Bai continued to retain its status as an important port, but due to the rise of the opium trade and piracy in the area, plus still being plagued by rampant crime, the Bai authorities stepped in to restrict trade in the area. In 1889, the Ingerish were formally driven out when the Vang Ngat state government managed to buy the tin mines on the island. By then, however, there was little tin to be found and it was forced to close its mines soon afterwards. With the worsening economic situation on the island, sporadic riots broke out by the locals. In 1912, a controversial crackdown by the Bai forces killed 200 ethnic Kue on the island suspected to have ties with illegal opium traders or the pirates. The crackdown has led to the birth of the independence movement of Kuehong.

Vang Ngat was initially planned to be the new capital of the new Muinon Union, but eventually, Namthinvuong was favoured. During the Muinon civil war, about 14000 inhabitants and soldiers died in the Battle of Vang Ngat when Fayaan tried to claim the island. Fayaan has repeatedly bombed the island until the end of the war. When Muinon was partitioned, it became the provisional capital for (western) Kuehong from 1938 to 1945. The communist government decided to move the capital to Phong Thinh for easier administration of the region. Nevertheless, as part of the communists' initial plans for the country's industrialisation, a large industrial area was planned for Vang Ngat, but was shelved indefinitely in subsequent revisions. The communists still undertake a number of major infrastructural projects, such as a new tunnel connection between Vang Ngat and the mainland.

Vang Ngat is one of Kuehong's smallest states, with just an area of 4016.32 km2 and land ara of 892.58 km2. It is the northernmost state of Kuehong. The state largely consists of Vang Ngat Island and a handful of smaller islets. The island is irregularly shaped, with a hilly and mostly forested interior. The central hub of the state (de jure state capital) O-man is on a broad, mostly flat area along the northern shore of Khang Ninh. From a small settlement, O-man has expanded over the centuries, particularly in the northeastern, eastern, southern and southwestern directions, eventually linking up with the neighbouring towns and villages and urbanising the entire northern coast of the island.

Meanwhile, the city is surrounded by hills; to the south and east are ranges that continue south to the mainland. The highest point of Vang Ngat is Vang Ngat Hill at 757 m. The island also has several rivers.

Vang Ngat has a humid subtropical climate. The summers are long, very hot and humid, and the winters are short, mild and dry. In most years, torrential rain occurs during the monsoon in the second half of May.

Like all states since the decentralisation of power in 2003, Vang Ngat is led by an elected State Governor, who is also one of the twelve members of the National Security and Stability Committee (NSCC). The State Affairs Council (SAC) of Vang Ngat led by the State Governor oversees matters pertaining to land, agriculture and forestry, local enforcement, civil and waterworks, and state administration, whereas matters that fall under the joint purview of both state and federal authorities include social welfare, wildlife protection and national parks, scholarships, husbandry, town planning, drainage and irrigation, and public health and health regulations. The 40 members of the SAC convenes in the State Parliament building, and the members are elected through state elections happening every four years. These 40 members are also mayors of the respective towns they control over.

O-man is the state's de jure capital, but due to Vang Ngat's relatively small size Vang Ngat has been treated as a city-state; the district offices are scattered all around the island itself. 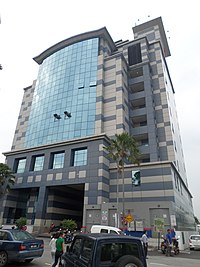 Vang Ngat hosts the Archantan office for the International Peace Council and even has an Assembly of Nations (AN) peacekeeping base in Vang Ngat. It also hosts a few consulates to nations and regional organisations. Being unofficially a city-state, it is also a sibling city to a few other cities.

Vang Ngat has a relatively well-developed transport infrastructure. The city-state is well-connected by land, air and sea; the Chung Nguoi International Airport is one of the world's busiest. The island is linked to the mainland via three bridges and a tunnel. The first bridge - Thang Cang Bridge (LS99) - was first built in 1822. It links from Thang Cang on Vang Ngat Island to Cao Uyen, Bo Sinh on the mainland. The second bridge, known as the Second Vang Ngat Bridge, opened in 1922 and links Chung Nguoi, Vang Ngat, to Bo Hat, Bo Sinh.

The Kuehongese National Railways (KNR) runs a rail line— the Vang Ngat Island Line— through Vang Ngat. The O-man Train Station is the main station on the line operating inter-town express services for the Line, linking it to the Northern Kuehong Main Line. Plans are underway for a potential High-Speed Rail service at Chung Nguoi and the possible conversion of certain parts of the rail line for mass rapid transit use. The KNR also currently operates the Vang Ngat Hill Railway, a funicular railway to the peak of Vang Ngat Hill. It was opened in 1903 and later overhauled in 2010.