Layr (Ingerish:Lyre, Castellanese:Laír, Lyrian:Lallr, Ohemian:Lair) offically called "Inkogg safè-Layr" (Kingdom of Layr) is a country located in Eastern Antarephia between AN134e and Bromley∈⊾ with it surrounding Bin-Emn while bordering the Asperic Ocean to the east, ruled under a constitutional monarchy; the monarch has ceremonial power over the courts and parliament. Within the territory are over 9.9 million people, densely packed within 3 major urban areas: Layrìtyan, Sante Agustìn, and Mortallì. The country's parliament is proportionately voted in meaning smaller parties can form coalitions.

As of the 2021 census there are 9,916,274 people who live in permanent or semi-permanence (6 months or more) within the nation.[1] giving a population density of around 476 people per km2 relatively large for the country.

The ethnic makeup of Layr mainly consists of native Layri people including distinct Holmic ethnicities such as from Federated Holmic Islands and Liberon with a minority of Bromlavians and Sanmarquino. A much younger population, has led to high natural increase rates among urban population with up to 71% of them living in urban areas, with a birth rate of 5.4 per couple, it is amongst the highest in the world with estimates saying by 2030 the population will have risen to 11.5 million. [2]

Sante Agustin is the most populated place in Layr with 2,267,832 within the city itself and with the Sante Agustin-Quetren Metropolitan area accounting for almost 4.3 million people almost half the county's total population.

The main and official language Holmic, a branch of the Keronic language family, all of the nation is taught or uses the language in any form including primarily spoken in areas of lower literacy. Some minority languages such as Ingerish and Cifontian are used within multi-cultural districts in Layrìtyan and Fòket'.

Layr has mountainous regions on much of its southern borders with its neighbour Bromley, with Sumò mountains having the tallest peak in Layr. There are two main bodies of water: Erdadonga and Donga Logg∈⊾, both provide regions of economic activity for fisheries, this is also seen on the island of Tabyet∈⊾ just off the coast of Layr near Bennkan and bin-Egko which is almost covered in a third of bogs and marshland. Geologically most of Layr consists of sedimentary rock, with metamorphic and igneous rocks being deeper and in mountains rather then on the surface, this is due to the volcanic activity from tectonic plates during the Jurassic age.[3]

Within the mountains are many deposits of minerals such as limestone and granite, with other deposits of coal, iron oxide and precious gemstones like topaz, amethyst and citrine. Fields across Layr are arable and fertile containing nitrates and other important minerals for agriculture.[3]

In the temperate region, Layr receives unusually warmer temperatures due to ocean currents bringing warmer waters and winds from the Equator, this results in an influx of tropical storms and cyclones during the summer and autumnal months.[4] On average Layr receives 1371.6mm (54in) of rainfall per year and has an average of 30°C-34°C (86°F-93.2°F) in the summer and 5°C-12°C (41°F-53.6°F) in winter.[5]

Earthquakes aren't infrequent in Layr, although they don't pose as much a threat to rural regions. Urban regions however are poorly built and power lines fall easily, and gas lines rupture causing frequent fires and outages for a few weeks after strong tremors. Cyclones on the other hand have been known to batter the coastal and capital regions causing widespread disruption in bi-Nwa and Layrityanò Plerekinareglè, which usually means flights connecting through Layr are rerouted back to the relatively safe Strait of Lyc.

~5000BC
The oldest traceback to human habitation of Layr was during the 5000BC, with traces of old agricultural tools being excavated towards the North of Layr near Erdadonga, seemingly indicating a small settlement in the area. This follows a migration of ancestral peoples South from the relatively warmer Lycene region. This is attributed to a sudden increase in temperature near the equator of which led to less comfortable conditions for humans living there.

Other indications include the domestication of a plant known as the Popute plant which bore reddish-brown fruit, traces of the plant can be found on the exterior of tools and interior of some storage objects. However, this plant no longer exists, becoming extinct around 700BC due to changes in the climate and soil conditions.
~3000BC
Archaeological digs conducted in 2012 during the renovations of Parliamentary buildings presented indications of a large scale settlement and society of native Layri people on the Southern side of the Waro Layr, technological advancements of this era include rudimentary preservation of milk in the form of curds and drying of fish as shown by pottery and preserved waste. A bronze object recovered from the site, presents the beginning of the Holmic-Asperic Bronze age, showing early development of culture and society within the East of the Antarephian continent During this age it is presumed that there were fairly few skirmishes between different tribal groups at the time, with many working together to hunt for wild animals and the planting of crops such as grasses and fruits which gave nutrition when combined with the rich diet filled with several fishes native to lakes and rivers in Southern Layr such as the Berac Perch and Etreyò Monkfish.

1200BC-500BC
In Layr, the first iron tools and weapons are forged, starting a centuries long war between two feudal states within Layr and with opposing nations surrounding, known as the Mortallìan War (named via the first conflict with the attack of Mortalli). Historical sites in Mortallì and Atryà contain many attributions to this war with a few surviving stone tablets being archived by a religious predecessor to the Mèmedian Church, within the Western Church Complex in Atryà. This era was known as the Ggollic Iron age and lasted until the year 500BC; In this time the invention of early medicines and herbal remedies were started with the formalisation of it coming around during the 8-7th Century BC using the Ussedys bush bark and flowers shamans were able to create anti-microbial fluids and powders which could be used to sterilize wounds or could be ingested to relieve mild infections, similar to anti-biotics and iodine used in surgeries today. The native plant in Layr is said to have helped the nation to trade easily with its neighbours and sailors allowing it to stay mostly independent. During this time weapons like the crossbow were have said to been invented, a few decades after its creation in Bai showing separate occassions of the weapon being made.
500BC-0AD
Around 370BC a method of casting iron in a blast furnace allows native Antarephians to prepare many tools and weapons for the construction of not only monuments which have been found on the island of Tabyet but also religious practices with the initial Nemia prayer beads stemming from this with the iron being cast in the shape of the beans of a Hero bean plant. This was decades after its invention somewhere in Uletha.

Although severely degraded we can see the geographical remnants of the many cities built by the Layri empire before the colonisations of the Ingerish and Castellans, it is thought that it were many a peaceful time with it being a centre of trade along the East of Antarephia and the Lyc Strait with a bustling industry of blacksmiths working with the relatively recent discovery of cast iron and further discoveries in the fields of medicine and metallurgy, the city was referred to as berGgilam in surviving inscriptions and texts from the era, which were destroyed by a further war between 150BC and 50BC by a faction of Burkuten origin which were found much closer to the now Lucero of San Marcos. This event severely impacted trade and the development of Layr meaning the nation fell behind for a century as they tried to recoup the losses of that war, the Berkuten using salt from the Vordum sea to harm the fertility of arable land towards the north, destroying crops for many years after.
0AD-200AD

Currently at a ceasefire, the nations of Layr and Bromley∈⊾ are still at war[6][7], this has resulted in multiple casualties along the Southern border with the country and the people have a very bitter attitude to one another. This war has been ongoing for multiple decades spanning from the 1960s to the present-day ceasefire although bitter sentiment has preceded this conflict since the 14th century. The war initially stemmed from Layr's claim to the Greater Layr region[8] which encompasses Barkenfry, the Cambrian Union and Layr, the final front for Layr being Barkenfry as it had not been sequestered from the Bromlavians since a brief invasion during the 1960s to 70s.

There are a wide range of political parties in Layr, based on a proportional representation system which allows even small parties to win seats to argue in Parliament. Below is a list of the 7 major parties.

Layr has two capitals, attributed to the two areas it is comprised of with the traditional southern state containing Layrìtyan and the larger north state with Sante Agustìn which mirrors the name of the city across the river both developing separately but named similarly after being split by the war of 1812. The latter handling judicial matters relating to the nation and its courts as well as the executive offices and the former legislative matters, forming laws and being named in the constitution.

Layr's economy has strong fisheries and agriculture in the primary sector as well as mining in various large quarries in Logg and Artroda, and has ventures into manufacturing such as chemical synthesis, plastics and steelwork alongside car manufacturing in Atryà and Bentì, along with factories in Layrityanò Reglè (Port Layrityan).

Bio-Layrityanò supports a major part of the manufacturing and research sector in Layr, creating jobs for around 25,000 jobs in the region and abroad.[9] Hosting a major facility for chemical synthesis in Port Layrityan and a smaller plant in Paholm Industriabolorò Parke. Lucian Pereyò or Lucian Orchard hosts almost all non-perishable food packaging and production and 50% of perishable foods in Layr, with a few smaller subsidiaries in supermarkets, convenience stores (Paylaw's) and logistics for carrying milk, fruit and other crops. Paylaw's in Layr

Layr has one major banking corporation: Layrò Banko-Trin[10], and a few regional banks such as Tabyet Banko and BankoLoggo. Layrò Banko-Trin is also the only bank permitted to print monetary funds and mint coins for the country.[11]

Due to the warmer temperatures in Layr, it has become a holiday destination for many tourists coming up to the equator from the Harda region especially Kofuku with 10% of Kofukens spending their holiday there. [12] This has led to the construction of several tourist destinations nearby Bennkan such as Kofuku Ragal (Kofuku Village) where many come to rent accommodation during the summer months, consisting of various guest houses (or more commonly known as Bed and Breakfasts'), hostels and hotels with commercial areas; interestingly due to the amount of Kofukens that settle locally there is a local supermarket and community centre especially for those who immigrate to the region. A map to the right shows a map of the current region.

Layr acts as a hub for connecting flights for Antarephian Travel, through its national carrier Layr(Airline). Below is a flight map for the airline. Layr opened its first airport in Autumn of 1940, 4km away from Layrìtyan; serving as an airfield for the military as well as to import humanitarian goods as at the time Layr was suffering from widespread famine after the 1940 7.2 magnitude earthquake caused widespread wildfires around the capital and central regions. 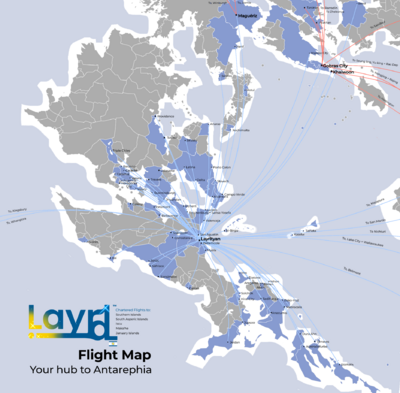 As part of the Antarephian Coalition, the nation doesn't take on as much of a role in maritime ventures with the main companies found registered in the Hardan nations, there are however ferries between Eastern Antraphian nations such as the Keronic-Asperic islands aswell as the southern tip of the Latinan Peninsula providing travel from Sanata to Ochent, the company facilitating this is L:Regle a private company which is state-sponsored after being sold off to bolster finances for the purchase of a new navy ship.