Maintaining coastline integrity is important because when there are gaps or mistakes in the coastline, it can create major rendering problems on the map, which look like giant "floods." Everyone should be careful with the natural=coastline tag. Unlike with other tags, please do not just "play with" coastline tags to experiment with "how it might look" - the map renderer handles coastline tags differently.

To protect against disruption the coastline is automatically checked a twice an hour, and only passed to the renderer if it has no errors. This check is done on each continent in turn, with the last good coastline being used for a continent when it has issues. So, a single coastline error will result in a complete continent not having its coastline updated.

The "too many nodes" Problem

The OSM standard does not allow more than 2000 nodes in a coastline way (or any way, for that matter, but it's a problem most commonly seen with coastlines). The solution to the problem is simple - you just "split" the way into two ways, connect end-to-end. This is a single step in JOSM. If you start with a single coastline way, you can select an individual node and then use the "split way" feature (keyboard shortcut "P"). Done!

Coastlines must be in the counter-clockwise direction, with land on the left side of the way.

It can be quite difficult, however, to find the exact location of the cause of a "flooding" problem. To help with that, the following very useful map overlay has been created, which displays nodes where the coastline is broken in some way:

You can click on a marker in that map to see more information about the related node. A full discussion of how to maintain coastlines can be found on the

openstreetmap wiki. A very short summary is that nodes must be:

In the case of a continent flooding, you're all - especially the more experienced users - called upon to try to fix it. Because it is important, it is justified to make an edit in another user's territory if you see a coastline problem.

The following table lists a summary of the coastline condition for each continent. Any error in a continent will prevent the coast being updated for that continent.

The .osm.pbf links can be loaded directly into

There are some lakes and seas in Openstreetmap that are tagged as natural=coastline. This has been deprecated. Quoting from the OSM wiki:

Before multipolygon relations were added to OSM, some large lakes were also tagged with natural=coastline, but most of them have been converted. Currently there are a few large lakes left (like the Great lakes), that still use this tag. Because of the complexity and size of these lakes, this tagging is difficult to change, so they might stay this way for the time being. But you should not introduce any new inland water areas that are tagged this way.

If you draw large lakes and inland seas, best practice is to use natural=water / water=lake, either as a simple closed way or as a multipolygon relation.

Here is a great graphic that summarizes OGF coastline work. 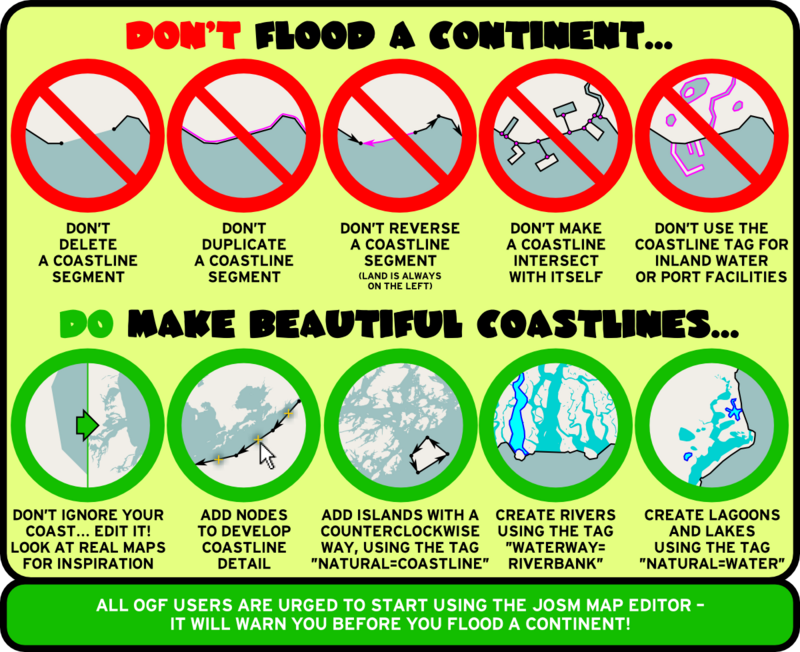