From OpenGeofiction
< User:ReCharged/Sandbox
Jump to navigation Jump to search

Reun [ʀɔın] is the national capital and one of the eight states of Luthesia. With around 2.6 million inhabitants, the city is the most populous and with around 760 square kilometers also the largest city in Luthesia. Around 7.2 million people live in the surrounding Reun Lowlands metropolitan region. With this around 70% of Luthesia's population live in this region.

The city-state consists of 18 city districts. In addition to the Brehm river, there are several smaller rivers in the city, as well as numerous lakes and forests. Mentioned for the first time in 58 AD, Reun was the residence for most of the kings and queens of Luthesia, as well as the capital of the newly formed United Kingdom of Luthesia in 1858 and seat of the state government, parliament, as well as numerous state ministries and embassies.

St. George's Cathedral illuminated by lights in the evening.

Reun's distinctive reference point, St. George's Cathedral, has the geographical location: 43° 11' 861" north latitude and 118° 30' 523" east logitude. The urban center of the city is around three kilometer to the south-east in the district of Nottenhausen. The largest expansion of the urban area in east-west direction is around 26 kilometers, in north-south direction around 22 kilometers.

The city is located in the north of Luthesia and borders the states of Nabur to the north and north-west, Brehmland to the west and south and Angerland in the south-east.

The historic center is located at the north banks of the river Brehm, where it's the most shallow and therefore the most easily passable point of the Brehm, around 30 kilometers from where it flows into the Bay of Reun. Most of the city lies within the Reun Lowlands but borders the foothills of the Nabur mountains in the north and the Bogenwald mountain range in the south. The city now spans both sides of the Brehm and has a total area of xxx.xx square kilometers (xxx.xx sq mi), making it by far the largest city in Luthesia.

Elevation ranges from 16.8 meters (55.1 ft) to the far east in the Benfurt Marshlands, to 316.2 meters (1037.4 ft) in the far north (Bilgerter Kopf), although it also reaches silimar heights in the south.
The majority of the city though, lies within the lowlands of the Brehm, Luwer and Lersum rivers.

Numerous rivers flow through Reun, but also several lakes and meadow landscapes characterize the landscape, especially in the west of the city. The largest river, the Brehm, crosses the city from southwest to east and empties there in the Bay of Reun. Reunese tributaries include the Lersum, Seven (mostly culverted), Taver (partly culverted), Osterbrook, Rasbach, Lene and Luwer. In the extreme west, the Brehm and Lersum rivers cross an extensive floodplain landscape, which also includes the largest natural lake in Reun (Großer Kaltsee).

The deepest point in Reun with 16.8 m is in the Benfurt Marshlands, in the extreme east of the city in the district of Luwershausen.

Path towards the peak at the Royal Park of Linthern.

In addition to extensive forest areas in the north and south of the city, Reun also has a large meadow landscape in the west and many large parks. Since most of the large avenues and streets are lined with trees, Reun is considered a particularly green city. The more than 1,500 public green, recreational and park areas have a total area of over xxxx km² and offer a wide range of leisure and recreational opportunities. The largest of Reun's parks today is the Royal Park of Linthern, with a total area of xxx km². In addition to this, the Royal Park of Nottenhausen, the Fürstenburg Heath, the Olympic Park in Osterbrook, the Schlossgarten and the Bürgerpark Bürsten are among the most important parks.

The city is located in the continental climatic zone (Dfa). All four seasons are distinctly represended: Winters are cold and see frequent snow, even in the city center and average temperatures around 2°C (35.6°F). Summers are warm and humid with average temperatures around 20.2°C (68.4°F). Although a cool breeze blows off the Darcodian Sea in summer, inner-city warming reheats that air again. 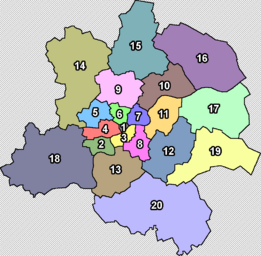 Map of districts of Reun with numbers.