Located in Northern Archanta, the Bai Empire∈⊾ (百帝国) is a Chinese-speaking country that was once a colonial power. While China is the main inspiration, with the country taking up the Chinese culture, heritage and language, the Empire is not intended to be a carbon copy of the China we know today. Think of the project to be an answer to what a functioning, modern Chinese Empire will be like, with relatively stronger influences from other East Asian cultures.

The project has recently been expanded to encompass (at 812540.00 km²). The project is being led by me, zhenkang, and anyone interested in participating is welcome.

The Bai Empire is intended to have a strong economy with moderate levels of development. It is a regional power with have a strong influence on regional history and culture. Close coordination will be required if you happen to be a neighbour of Bai. 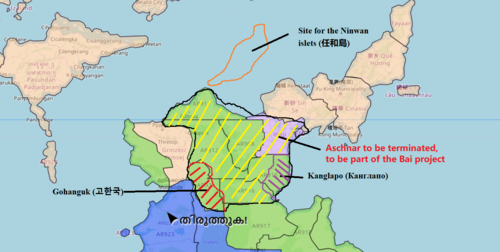 The above is a draft map drawn in December 2020. The boundaries will shift over time as the project evolves.
Orange and Red for (the tentatively named) Ninwa (Japan) and Chohan (Korea) respectively. Yellow for the Bai Empire and Purple for my personal conlang project Kanglapo

While these are more like guidelines than actual rules, please adhere to them unless granted permission to do so otherwise.

Anyone with a background, interest, and/or understanding of Chinese culture and history (especially pre-PRC Chinese history) is welcome to join in the project. (It is not necessary to have proficiency in the Chinese language.) Mappers may claim their own province, or sign-up to be part of the three collaborative projects (detailed in the following sections).

To indicate your interest in joining the Bai Empire Project, please ask on the discussion page or message me personally.

There are plenty of stuff that is needed to be done. Any help is welcomed.

To see the lore of the Bai Empire, read this article.

The history of Bai is long and eventful. In the 12th century, the First Bai Dynasty was established after centuries of divisions and war. It was succeeded by the Suo, after a Ninwan (or a foreign power) conquest in the 13th to 14th centuries, similar to the Mongol-led Yuan Dynasty. During the Suo, the Bai Empire set out its colonial exploits, establishing new colonies beyond Northern Archanta and Eastern Uletha. These colonisation projects wouldn't last, due to dwindling funds that drained the Empire's economy.

The "Dark Period" of Bai came in the 16th century when corrupt bureaucrats and merchants led to the Suo's collapse and the Lin was established. During this period, Bai gave up many of its colonial possessions through pacts with the West Ulethan colonial powers, which were also given control over parts of the Empire proper. The Middle Bai came in the 17th century, which established the semi-constitutional monarchy (influences from the West). This dynasty was considered the "peak" of modern Bai but collapsed with the rise of radical ideologies such as Bai Fascism and communism.

The War of Fellow Brothers erupted after the fascists gained power and overthrew the monarchy. The fascists, rather expansionist and with a need for resources, waged war with their regional neighbours. While they were eventually put down with a coalition of resistance forces, its collapse led to the Warlord Era, where many factions competed for influence. The New Bai Dynasty only came about in the 1960s, and the Empire rapidly recovered economically to regain its influence in the region. 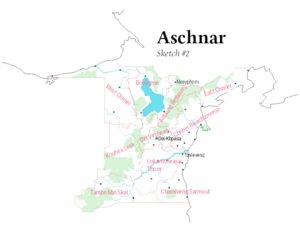 An old plan for AR909 (a Khmer-speaking collaborative). Some sketches of the plans remain relevant for this project

A (sketch of a) topological map is needed to determine the major geographic features and the major road and rail infrastructures.

The geographic layout for the Empire (which has been mapped during the former Commonia period) will not drastically change. The central area will remain mountainous, with flatter fertile regions at the north and eastern coasts. Some of the existing major rivers will not be erased, but their course may be modified accordingly to be topographically consistent. There will also be some changes to the coastline to make them more detailed and natural. The boundaries will also shift once the geographic features are mapped.

The main language used is Mandarin Chinese, the main script Simplified. However, certain regions and states may use other dialects like Cantonese (e.g. Port Dunghoi), Hainanese, Hakka, Hokkien, Shanghainese, and Teochew. For the transcription of dialects, it is encouraged to use a non-Latin script like Bopofomo, Hangeul or Kana.

The_Cute_Chick has kindly helped sketched the road and rail network in the Bai Empire. Meanwhile, kengoman has drawn up a detailed documentation for the national road mapping convention. 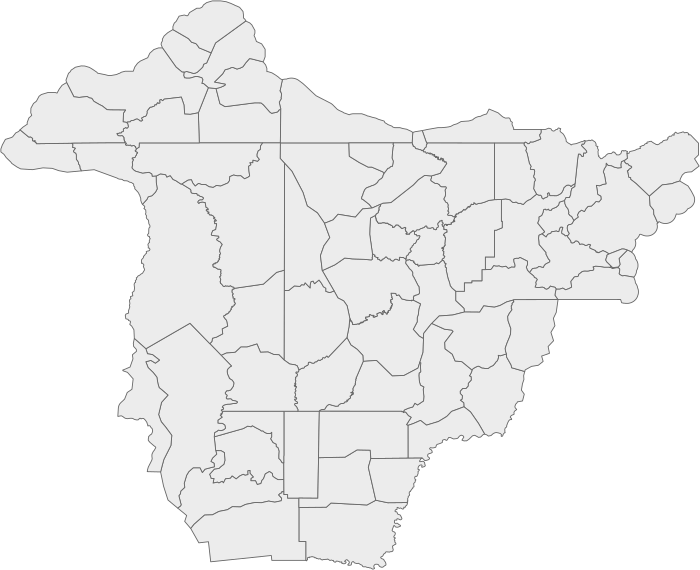 Map of the Bai provinces 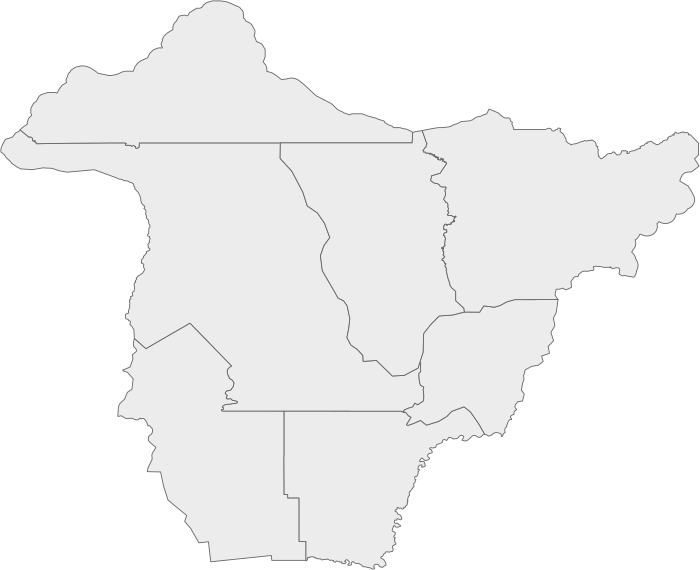 Map of the Bai zones

The Bai Empire∈⊾ consists of 60 over provinces and 4 municipalities. For administrative reasons, the Empire is divided into seven general zones (Gongshus):

These major cities are open for collaboration. All mappers, including those who have taken ownership of a province, are welcome to help develop these cities. Their descriptions are as follows: 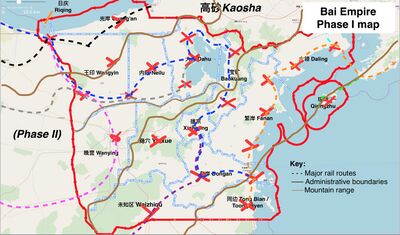 The description of the 13 provinces is as follows. Each province has a suggested level of development, with different recommendations for mappers interested in adopting a province. In addition to the above three collaborative projects:

These subdivisions can be taken up by one or more mappers. They have the freedom to map as they wish within it, subject to general overarching guidelines of each province (e.g. geography, railways, motorways) for consistency across the Project. Mappers are also encouraged to keep their provinces open for collaboration by other mappers, especially for the urban centres.

These are more advanced projects that are recommended only for more experienced mappers. While the current scope of these projects is limited to the area within Phase I, please be mindful that these will be expanded into Phases II and beyond. For these projects, please indicate the project ID in the subject line when messaging me.

Phase II and beyond 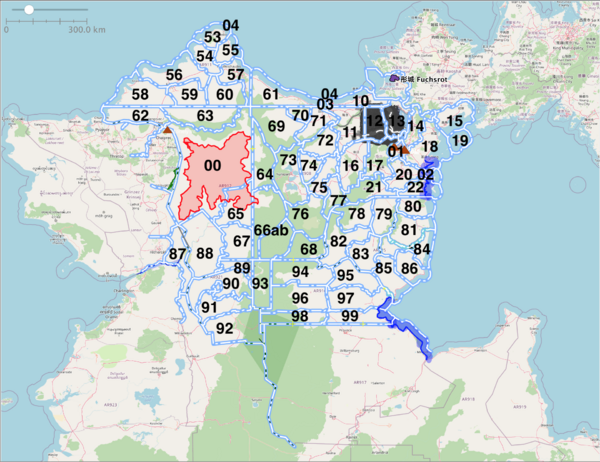 Preliminary province map for the Greater Empire. The red selected area is an intended desert.

Once Phase I is running smoothly, the Empire will further expand to include more provinces that include more Chinese cultures. Phase II, which will comprise the provinces numbered 78-86 (or AR915), will commence around the 2nd quarter of 2022. Other Phases remain tentative.

Provinces numbered 87-92 are intended to be part of a potential Burmese-speaking country, a close ally of the Empire.

The Bai Empire is welcome to establish relations with countries around the world.