Kotel is named for the House of Kostel (Franquese: Maison de Kôtel), founded by Anges de Kôtel. Anges de Kôtel, the emperor's keeper of the seal, received the lands which today is Kotel as his reward for his loyalty to the emperor. Famously, the city of Kostel was not included within the borders of Kotel.

Although Kotel was founded as a regency within Tigeria, it did not become a separate nation until the seven Tigerine republics voted to join the Pays-Rivages in the late eighteenth century. The Pays-Rivages recognized Kotel's sovereignty in the Treaty of Artisanople. 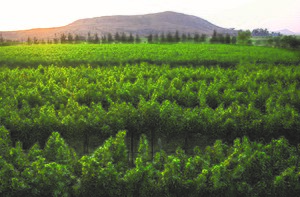 Vineyards in the Enchang Hills.

Wine is a significant activity in Kotel, with several famous wineries located on the Vintage Imperial Road in the Enchang Hills. The Regent's Own is considered the national winery of Kotel, and officials frequently host visiting dignitaries at the wineries.