Recent discussion on the discord has led to the conclusion that, as a way to celebrate OGF's 10th Anniversary, a mapoff should be held in OGF's most well-renowned collaborative country, Khaiwoon.

Right now, this forum thread is for planning and discussion. Khaiwoon is not currently open for mapping.

Things that need to happen before the mapoff (which is not a competition) begins are as follows:

Should Khaiwoon currently, in its untouched state be preserved in Arhet?

As the focus is probably going to be detailing and further development, is this step needed?

The structure for how space will be divided needs to be established.

This is based off of a recommendation from wangi. Two other suggestions are collapsed underneath this one.

Each interested mapper sets out their area of interest (a "proposal area"), and sets out what they wish to do. This is then approved and they are free to work on it. More than one mapper can work on the same "proposal area" with the permission of whoever originally claimed the area. In order to prevent mappers hoarding an area, time limits could be set (a week in length, perhaps).

The only issue I forsee with this proposal is the approval process - this aspect needs to be further discussed.

a) Khaiwoon is divided into neighborhoods. Each mapper can claim a neighborhood, and works only on that area (or on other areas if invited to by other mappers).

b) Mappers post where they will be working, and talk on this forum thread about their plans, collaborating more organically.

There are pros and cons to both A and B. A is obviously more organized and will result in less conflict, but risks having Khaiwoon look disjointed, like multiple different areas all mapped differently with less cohesion and overall planning. B will inevitably result in edit conflicts, but with good collaboration could produce a very nice blending of many user's styles that would be unique and in the spirit of the collab as a showcase for OGF. Perhaps a blending of A and B, where users work mainly in one area but are free to work elsewhere if they work things out with other users who are working in the same space? Please feel free to suggest other ideas!

Guidelines for the collab must be established. Here's a starting point based on discussions:

a) The focus should be on detailing and further development, not deletion.

c) The old town (what's within the motorway U at the center) and diplomatic quarter should not be touched for now.

d) Country-wide things that could potentially be improved will not be changed except for small-scale changes as part of the detailing process.

e) All the new stuff must continue to obey isleno's excellent topo map.

f) All mapping should be consistent with the current language, using the phonetics and style established by isleno.

I feel like Central Khaiwoon—or even the entire western portion of the large island—should be mapped by people working together, while the peripheral areas (eg. Batjun) and the rest of the islands (eg. Rockburn Island) can be mapped individually. So yes, a mix of A and B would be the best way to operate this collab. --IiEarth (talk) 23:17, 1 December 2022 (UTC)

I second to what iiEarth has proposed, although I would like to propose an amendment: based on what has been discussed on possibly having a mix between A and B, I feel like we can have the peripheral neighborhoods be "coordinated" by users who claim them, and said users would discuss and collaborate with nearby mappers accordingly. Personally, having mappers map only within their respective neighborhoods with seldom collaboration could lead to discontinuity in the mapping styles, names, etc. To summarize, I second iiEarth's proposal with the amendment of having mappers coordinate, but not "own" neighborhoods. --Geoc3ladus (talk) 00:18, 2 December 2022 (UTC)

I also think that a kind of mixed way between A and B can work. I am especially interested in the point d), helping in reworking the railway system. --Izaland Terramorphing Committee (talk) 01:34, 2 December 2022 (UTC)

While I also wish to rework the rail infrastructure in the country, priority should be detailing the various areas of Khaiwoon. I would like to look at Khaiwoon more organically and see how the city could have expanded. This will identify which areas are "older" and "newer", which will affect how each neighbourhood would look like and in turn how the metro is developed (the first lines will serve the major areas first). I also note that Khaiwoon is built on various islands merged together. We might need to identify the older historical islands, which are perhaps the basis for various regional hubs.

Further adding on: we can split the Khaiwoon project into multiple "centres" which can be further divided into neighbourhoods. Each "zone" will have a theme (more residential? more industrial? more historical? more cultural?).--Zhenkang (talk) 07:46, 2 December 2022 (UTC) 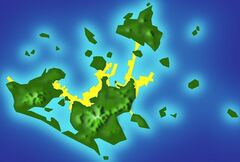 Reclaimed land in yellow.
There are some images on the wiki showing the reclaimed land - Khaiwoon-terrain-map.jpg and Khaiwoon-1868-map.jpg are basically the original vision for Khaiwoon's "land history" as far as I can tell. ---Lithium-Ion (talk) 15:24, 2 December 2022 (UTC)

I feel like there needs to be a little bit more clarity on the mapping style of Khaiwoon and it's irl inspiration. I hear that Singapore is the main inspiration, with a bit of Hong Kong as well, but neither of those cities use grids anywhere near as much as Khaiwoon. Is it planned to remove a lot of the grids, just keeping the main roads, or keep the grids and diverge further from Singapore? Right now, the mapping looks are bit more like Xiamen (www.openstreetmap.org/#map=13/24.4921/118.1312). Gubble (talk) 12:54, 2 December 2022 (UTC)

I think that the grid style and alignments should be kept - it looks good and makes sense to me, and uniqueness is part of what makes Khaiwoon feel like more than just an OGF:Singapore. --Lithium-Ion (talk) 15:24, 2 December 2022 (UTC)

I'm just going to formally state for the record since I saw it come up in discussions about this elsewhere- in terms of retaining uniqueness, I believe retaining the original language of Khaiwoon is a must. isleño left a very detailed well-crafted conlang and even information on how words are structured, common syllables, etc. It seems integral and bare minimum to retain if this collaborative endeavor is intended to be based on his original vision. --Ernestpkirby (talk) 21:14, 2 December 2022 (UTC)

I'm not sure I like the idea of turning Khaiwoon into a collab. If you want to build OGF:Singapore, you can put it somewhere else - nearby, or far away (maybe closer to OGF:EastAsia...). Based on other collabs (and the fact that we have far more collabs already than we have interested participants), I'm not sure that Khaiwoon would be improved by becoming a collab. Bear in mind, too - I am still in touch with isleño, and he has not ruled out returning to OGF.--Luciano (talk) 14:38, 2 December 2022 (UTC)

Agreed. There's no shortage of vacant mapping (and inactive collabs) available in the OGF world. No point in redoing what's already mapped when we have so much new real estate we could leverage into this kind of megaproject instead. --TheMayor (talk) 14:54, 2 December 2022 (UTC)

The goal isn't to turn Khaiwoon into a collab again - I don't think anyone wants to add another permanent collab to OGF at the moment, as we're rather full (as you've pointed out). Rather, the hope is to celebrate OGF by briefly opening Khaiwoon to continue to develop it for about a month, continuing the vision of Khaiwoon. I think there's a lot of interest in participating in improving and continuing to build Khaiwoon, and I hope that it would be a success. Nevertheless, you two both make good points, and ultimately it is in the hands of the regional admin/the admin team as a whole. --Lithium-Ion (talk) 15:24, 2 December 2022 (UTC)

It's really just a question of scope, of balancing a respect for the early collaborative work and the substantial effort put in then to many items. So, big issues such as reworking the islands, farming and language should be off the table. Instead the focus should be on increasing the believability of the mapping - doing the next level down of detailing. I'd suggest a very proscriptive approach - mapper sets out a detailed description the area they want to work in, and what they want to achieve. Discuss and get a time-limited sign off. /wangi (talk) 23:22, 2 December 2022 (UTC) /wangi (talk) 23:22, 2 December 2022 (UTC)

Fundamentally, from my understanding of this project, priority remains on detailing existing neighbourhoods and infrastructure. While I do desire to work on the metro network, I understand that is off the table, and it will take more than simple changes. (That said, at the very least the GoHSR alignment can be further detailed especially at the Khaiwoon terminus). There are still other aspects of Khaiwoon to work on, like an electricity grid, defence installations, college campuses, memorial parks, sporting centre etc etc.
Honestly, as also discussed from the discord server, while some desire to have the conlang more aligned with Indian languages in the region (Sinhalese and Hindi in nearby Niulutan-Riu), I think it's fine as it is. There's indeed a well-established phonetic structure, which I think needs to be more accessible somewhere (I think the conlang generator for Khaiwoonese names is offline)

The overall goal should be to expand and enhance the existing mapping. I don’t think any mappers should alter existing mapping in Khaiwoon at all, unless it’s to add detail to areas that are already mapped. The existing conlang is well-established and should not be up for debate.
My personal feeling remains that Khaiwoon should not be altered at all without its original mapper’s blessing. Since that ship has sailed, so be it, but I’d encourage mappers who are not already involved in this project to find a different way to celebrate OGF’s 10th anniversary. –TheMayor (talk) 08:44, 3 December 2022 (UTC)

@wangi I think that your suggestion (and Luciano's in the above thread) is very reasonable. I've changed the guidelines to reflect that. --Lithium-Ion (talk) 18:37, 3 December 2022 (UTC)