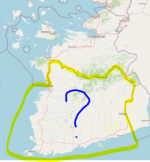 I happened to notice as I was creating the new Southern Uletha Economic Cooperation Council and going through the membership list that there is a part of the OFG overview map that is not showing as part of anyone's territory.

In JOSM it also appears all of the border lines have had all their tags removed and there is no country boundary relation set up for this area. This has made this territory appear to be unassigned to anyone. I noticed that there are many place names in this area that have Greek names and wasn't sure if this was part of your territory or not, or if you were doing a special project there. I really am not trying to be nosy about it but was just curious. At any rate I wanted to at least let you know what I had found in case you were not aware of it. Happy Mapping--Indyroads (talk) 19:56, 13 March 2022 (UTC)

I gave up that area a couple months ago since I wanted to downsize Arion, and stjur told me to just leave the area stateless instead of creating a new territory or merging it with UL02d. Something will happen to it eventually, I'm sure, but for now it's in a bit of a limbo. --Lithium-Ion (talk) 22:46, 13 March 2022 (UTC)