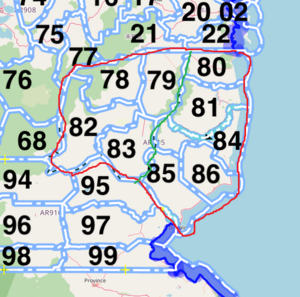 AR915 will be split into two territories. One is an extension of the existing Bai Empire, the other half by the east coast will be Kanglapo. The Bai extended region will be inspired by the Sichuan and Guizhou provinces.

An existing range will divide the two nations, shown by the green line. Wedged between the two nations, there will be a landlocked nation Kinglavia, an isolated nation similar to Bhutan but culturally similar to Kanglapo. Another inspiration could be Andorra, another microstate between Spain and France.

Generally, the region will be flat. The Bai side will be much similar to a valley, with rivers running parallel in a general northeast direction into Bai proper.

The Bai side will be heavily forested like the Sichuan and Guizhou provinces, with plenty of panda habitats alongside fertile lands and bamboo forests. Kanglapo will have similar geography, though less forested.

The sectors of 79 and 83 will be more heavily populated than 78 and 82. There might be a major municipality somewhere between 78 and 83, which is close to Kinglavia and is a common gateway between the two nations. It might be a historically important city, perhaps a former communist stronghold during Bai's political turmoil of the 30s and 40s. Generally, however, this part of Bai will be less developed.

Kanglapo is a "communist" nation, which saw plenty of industrial developments throughout its modern history (explaining the less forested area). Much of Kanglapo cities will be centrally planned, with a possible underground city dedicated for the country's scientific research. Its capital, Nandacheongfu, is located south and is a major city. Kanglapo will have a developed rail system to serve the country.

The extended Bai region will be based off the cultures of Sichuan and Guizhou. Such influence will also be seen in Kanglapo known for its spicy food. Kanglapo speaks a unique conlang inspired by various Asian languages (Thai, Korean, Japanese), with a slight Slavic twist due to its past occupation by Suria. The language will use the Tai Lue script. Example: ᥢᥢᦡᥓᥥᥨᥒᥜᥪ Nandacheongfu; ᥛᥤᥒ ᥔ ᥞᥤᥒ Ming Sa Hing

Kanglapo was ruled by various warlords in the past, before control was centralised thanks to its status as a Bai tributary state. As the ruling Bai dynasty declined in the 17th century, the Kanglapolish region was handed to Suria (this has been discussed with the Surian mappers and they seemed fine with the idea) in exchange for some money. The Katayan people then fought for independence, briefly becoming a kingdom, then a republic, and a communist state in the early 20th century. It was invaded by Bai in the 30s and 40s during the War of Fellow Brothers. After the war, the ruling dictator died, and was suceeded by Li Ching Sam, who implemented economic reforms that explained its rapid modern infrastructural developments today.