Adamsville is the capital and largest city of the F.S. State of Ogdalen. It is located mainly in Adams County, with a small portion in Colsex County, and is the county seat of the former. With a population of 357,543 as of 2020, it is the ___th largest in the nation. It is the center of the Adamsville Metropolitan Area, with around 1.4 million people, which is one of the fastest growing metropolitan areas in the country.

Adamsville was founded in 1772 on the banks of the Cholotka River. It was named for Fort Adams, which was named after explorer Henry Adams. The city quickly grew as it was the uppermost navigable city on the river upstream from Lake Fisher. In 1802, it was named the state capital of Ogdalen, replacing Morganton. After slavery was abolished, it became the most industrialized city in the northeast.

Today, it is a major center for the music industry, especially country and hip-hop. Other important industries include food distribution and manufacturing, automobile assembly, healthcare, and technology. Major corporations headquartered in or near the city include Archantana Records, Cybus, Musician's Center, Myriad Health, and Winstons. Notable attractions in Adamsville include Patriot Park, home to the Ogdalen Capitol Building, the Myriad Health Field, home to the Adamsville Ospreys, the Archantan Music Hall of Fame, the Museum of Country Music, Fort Adams State Park, and the Riverwalk. It is home to many colleges and universities, including Evergreen University, which is consistently ranked in the top 25 schools in the nation.

The Ogdalen Tower, the tallest building in Adamsville and Ogdalen

Adamsville is divided into many neighborhoods. Downtown Adamsville contains most of the high rises in the city, and many cultural and historical attractions, including Fort Adams State Park. Music Square, just to the north of downtown, is home to the center of Adamsville's music industry. To the southeast of downtown is Ogdalen Yards, known colloquially as The Yards, which is a gentrified industrial area next to the railroad with many upscale hotels, apartments, and shops. North of downtown, above Broad Street, is the Medical District, which is home to many of the city's hospitals and clinics.

East of The Yards and FS-370 is Uptown, which is home to Evergreen University. To the south of Downtown and Uptown are the neighborhoods of Myrtle Park, Kalmish Garden, and Blossomdale, which are home to the majority of the city's black population. To the west of uptown is the affluent and historical residential Abbottson neighborhood.

To the west of OG-11 and between the Old Xylopolis Highway and FS-__ is an area known by locals as "The Slice". It consists of affluent, majority white suburbs and is the richest suburban in the city. It is named The Slice as it "takes a slice" out of the poorer, mainly minority neighborhoods to the east and north. In the heart of The Slice is the Stapleton Neighborhood, which contains a large business area where many companies are headquartered and has the largest mall in all of the northeast, the Stapleton Mall. The Slice continues south outside of Adamsville to the exurban suburbs of Wedgewood and Summit.

Just like most of the northeast, Ogdalen has a humid subtropical climate (Köppen Cfa), with 4 distinct seasons and hot, humid summers and cool, wet winters.

Starting in the early 2000s, Adamsville's economy has boomed due to several corporations moving there due to its low taxes, and its population booming due to its low cost of living and favorable weather, making it one of the fastest growing metropolitan areas in the Federal States. It has been ranked by many publications as one of the best cities to move to, start a family, and start a business. Major companies headquartered in the Adamsville Metropolitan Area include Myriad Health, Cybus, Winstons, Archantan Records, Musician's Center, Sunny Side Up!, and Farmer's Supply. 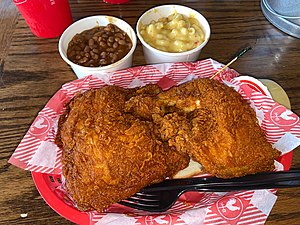 A typical meal from Adamsville, featuring fried chicken with baked beans and mac & cheese on the side.

Adamsville is a center of the unique cuisine of the Northeastern Federal States. Popular foods include fried chicken, barbecue, and and ham. Downtown Adamsville is home to the famous Restaurant Row, which historically has been home to some of the most prestigious restaurants in the nation, but in recent years has turned into somewhat of a tourist trap, with much lower quality restaurants along with gift shops and other stores.

Being a major center for the music industry, Adamsville has a vibrant music scene, and it is common for local artists to preform at restaurants, bars, and cafes. The professional music industry is centered in Music Square, along Music Street and Casper Street, where many record labels and record stores are located. Adamsville is often considered the capital of country music and is also a major center for pop and hip-hop. Adamsville is home to many museums and attractions related to music, including the Archantan Music Hall of Fame, the Museum of Country Music, the Jazz and Blues Museum, and . In April, the week long Adamsville Arts Festival is held, bringing professionals and fans alike from the music, theater, dance, visual art, and many more fields.

Adamsville's biggest draw for tourism is its music scene, drawing fans, researchers, and aspiring musicians to the city. Attractions in the city related to music include the Archantan Music Hall of Fame, the Museum of Country Music, and the Jazz and Blues Museum. Many tourists also attend live preformances by country musicians at the ___.

History is also a big draw for tourists to the city. Fort Adams State Park, located in downtown, features a reconstruction of the 18th century, and is the most visited state park in Ogdalen. Also located in downtown is Patriot Park, home to Ogdalen's capitol building.

Although not located close to any major recreational attractions, Adamsville is commonly used as a base to explore recreational areas in different parts of Ogdalen, such as Lake Fisher, Lone Mountains State Park, and the mountains in the west and north of the state, including Balsam State Forest.