Ogdalen (/oʊg'dɑlɪn/), officialy the State of Ogdalen, is a state in the Northeastern Federal States. With a population of 2,896,348 as of 2020, it is the __ largest state by population in the nation. It is bordered by Eustacia to the east, Wilthamshire to the south, Michisaukee to the west, and Randalia to the north. Its capital and largest city is Adamsville. Other major cities include Graggville, Morganton, and Casper. It is one of the poorest, but most culturally rich states.

In pre-colonial times, Ogdalen was inhabited by several indigenous groups, including the ___. In the ___s, it was settled by the Ingerish, however, due to its backcountry location, it was never settled to the extent as the coast. When the colonies became independent, Ogdalen was part of Eustacia, however on _____, it gained statehood, becoming one of the first new states formed after independence. Historically, Ogdalen's economy was based on agriculture, however, after slavery was abolished, it became a hub for manufacturing, especially automobiles, and it became the most industrialized northeastern state. Today, food production is also a major industry. Ogdalen has been influential on the development of several different music genres, including country, jazz, blues, and rock.

Ogdalen has diverse geography. In the north, along the border with Randalia, are the ___ mountains, which are a heavily eroded and forested mountain range. In the west are the ___ mountains, which are part of the (Eastern Mountain Range), which consist of alternating ridges and valleys. This area has many plateaus with karst geology, with many caves, canyons, and waterfalls.

The name of Ogdalen derives from the Cherokee village of ᎣᏓᎸ (o-da-lv), meaning something along the lines of mountain, which most likely referred to a village near present day Graggville, on the Cholotka River. The name was first found on maps around 1720, but was used to refer to the whole area around 1750. In 1765, the Ogdalen County was created in eastern Eustacia, and in 1771, the Ogdalen territory was created from the eastern part of Eustacia.

The first Ulethan expeditions into what is now Ogdalen were by Castellanese explorers from coastal settlements in what is now Laine and Elway in the late 15th century. During the late 1500s, Ingerish explorers and fur traders also explored the area, but made no attempts at settlement. In the early 1600s, the Castellanese mapped the area, and constructed some backcountry forts, however also made no attempts at settlement, leading to Ingerish settlers from the colonies to the south settling the region. The Castellanese colonial government, which was isolated from the primary Castellanese colonies in western Asperia, were very permissive to these settlers provided they pay taxes. These settlers mainly had an agrarian lifestyle, growing cash crops such as cotton and even importing slaves from Central Archanta. The area that is now Ogdalen became part of the Eustacia Colony, however in the backcountry, the government had little influence.

Following a war with the Ingerish against the Franquese, the Castellanese tightened their grip on their east coast colonies, which had previously been free to do what they wanted, and increased taxes, especially on Ingerish settlers, which had previously been low. This angered the colonists, and many started to agree with the Ingerish colonists to the south with the idea of independence. Following even more efforts against the Franquese, the colonial government continued to increase taxes, leading to the Castellanese colonies declaring independence along with the Ingerish colonies in 1757.

Due to its backcountry location, fighting in what is now Ogdalen was minimal, however there were many small skirmishes between militias. Due to the colony's majority Ingerish population, support against the Castellanese was almost unanimous, but opinions on the Ingerish were much more divided. Many Ingerish families who had lived in the region for generations had no experience with the Ingerish government and thought of it neutrally or even positively, which made it difficult to organize militias against the Ingerish.

When the Federal States was formed, it was part of Eustacia, however the lifestyle and opinions of the backcountry farmers were very different from the coastal elite of Eustacia, who controlled the government, and a statehood movement originated. In 1765, the Ogdalen county, which comprised the modern day borders of Ogdalen, was formed, with a high degree of autonomy, however residents still vouched for statehood, and in 1771, the Ogdalen Territory was formed out of the Ogdalen County, followed 2 years later by statehood. Morganton was originally made capital, however 9 years later it was moved to the rapidly growing city of Adamsville, which was now the largest city in the state.

After the independence war, many immigrants from Europe, especially from countries like Kalm, Lentia, and Westmandy, forming the unique culture of Ogdalen.

At first, Ogdalen's economy continued to be based on agriculture and slavery, with slaves were imported from central Archanta. When slavery was abolished, Ogdalen was one of the states to resist the strongest. After it was banned, natives were often forced to become sharecroppers and work in slavery-like conditions.

Ogdalen is bordered by Eustacia to the east, Wilthamshire to the south, Michisaukee to the west, and the Randalian provinces of Gelesia, Kovaire, and Midian to the north. It is in the northeastern region of the Federal States.

Ogdalen consists of 3 major geographical regions: the Piedmont in the southeast, taking up most of the state, the Ridge and Valley to the west, and the ___ mountains to the north. The latter two are part of the Eastern Mountain Range. 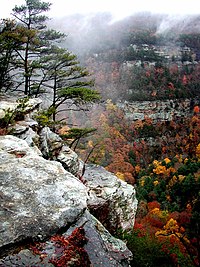 The Piedmont contains gently rolling hills suitable for agriculture, with some larger hills, foothills of the Eastern Mountains. The vast majority of the state's 2.9 million people live here, especially in Adamsville, Graggville, and Morganton, which are all located on or near the Cholotka River. The Cholotka river is the longest river in the state, with a length of approximately 122 miles. It flows from the extreme north of Ogdalen in the mountains to Lake Fisher, creating a flat valley where more than half of the state's population lives. In historic times, it was navigable up to Middle Falls, however in recent times it has been blocked by several dams. The areas around Lake Fisher are the flattest in the state, and several areas close to the lake's shore are wet and swampy. Several small mountain ranges can be found in the piedmont, that were once part of the Eastern Mountains but have long since been eroded away, including the Lone Mountains, Gragg Mountains, and Crow Creek Mountains.

In the southwest of the state, along the border with Michisaukee, is the Ridge and Valley region. It consists of many long and narrow ridges with long valleys between. The most notable of these is Sherwood Mountain, a flat plateau about 5 miles wide with many deep canyons carved into it, including Carnaby Canyon. The Ridge and Valley region starts in the east with barely noticeable ridges that only rise a few dozen feet above the surrounding terrain, but soon rise into long ridges hundreds of feet tall. The largest city in the region is Casper, with 78,405 inhabitants.

Fall scenery in the Shelton Balsams

The tallest mountains in the state can be found in the north, along the border with Randalia, in the ___ mountains. These mountains contain the tallest mountains east of the Alormen River, with the tallest exceeding 6,000 feet in elevation. The tallest mountain in the state is Mount Russell, at an elevation of 6,782 feet. The mountain's height gives it a climate comparable to the far northern Federal States or Ardencia. There are several subranges in the ___ mountains, including the Shelton Balsams, which contain 18 out of 19 of the peaks over 6,000 feet in Ogdalen, The Argent Mountains, the Great Cherokee Mountains, and the Rowland Mountains, which contain the other 6,000 foot+ peak, Pivot Peak. The ___ mountains are home to the endangered Shelton Fir, which can only be found in certain locations at elevations more than 4,500 feet. Due to orographic lift, the mountains get the most rain of any place in the eastern Federal States - over 100 inches per year in some places.