To discuss about the country, go to the forum discussion thread.

This is the main page for reference on collaborative guidelines towards the territory of Kalkara∈⊾.

The collab would be led by KAB and Alessa. Users that wish to participate would be asked to define their proposed work and then granted permission to edit in that area. There would be no reserved areas; if you map it in Kalkara, it could be edited down the line by other users as the project matures. To prevent edit conflicts, users would be notified of and encouraged to be mindful of others in the area.

Kalkara, Il-Kalkara natively, is a collab based on a Maltese theme with a few notable differences. To account for the unique combination of cultural influences on the Maltese theme, the history of the territory does parallel the real-world country to a degree. There are expected to be important historically walled cities along the strait, prevalence of Christic religious institutions, land divided in a pattern not unlike the results of an open-field system, prominent use of the Kalki (Maltese) language with Ingerish (English) permitted under certain circumstances, and lots of historic sites that would be from most periods of history.

At the same time, Kalkara will break from Malta in that it is an important international crossroads along the strait. It will have a major metropolitan area along that strait that itself will be more populous than the country of Malta. There will also be some rail (primarily freight) and motorway infrastructure, but it will not be as developed as most western-European themed territories. Malta may be very car-centric, but Kalkara will offer some variety in transportation modes.

Kalki (Maltese) is the official language of the territory, but Ingerish (English) is used in governmental and administrative matters. In practice, Kalki is the dominant language of the territory and will be used on the map for most matters. Ingerish may find a minor presence for some commercial matters. Mappers not comfortable with working with the real-world Maltese language are still welcome to participate. Labels in the appropriate language can be added by another user.

The strait is the primary focus of the territory. The largest urban area will occupy the location presently labeled on the map as the strait city. Its metropolitan area will straddle both sides of the strait itself. A motorway bridge and rail tunnel are expected to traverse the strait in the vicinity of the urban area. Other clusters of population will exist along the strait. A historic fortified city is likely on the northern shore of the strait at the easternmost promontory. A map for detailed organization will be produced later, as coordination with neighbors and planning of cities is more refined, but a preliminary sketch is available to provide a starting point for discussion. The southern interior should remain largely agricultural and with large swaths of forested lands. Dense urbanization should be largely confined to the gray area on the map, along the strait itself.

The preliminary sketch for the territory is shown here: 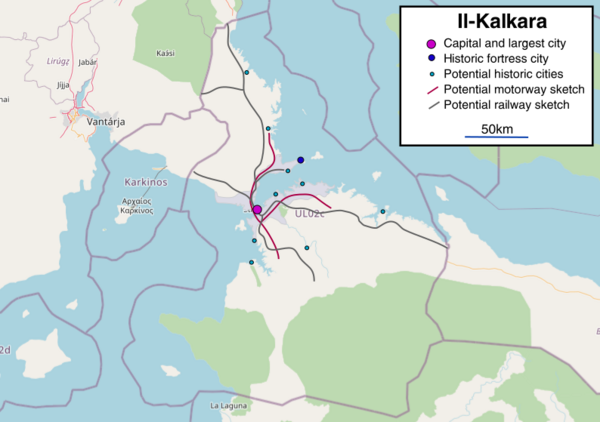 Things to be decided as the project unfolds

Those that participate in the mapping will be encouraged to help 'fill in the blanks' with history, government, and territorial development. For example, a list of historic grand masters will be needed to populate historic sites, manors, and municipal toponymy. Positions of other historically fortified settlements in the 'interior' of the country will also be needed. Other elements that need to be determined will be addressed as they arise with mappers that are active in the territory.