User of Kofuku in Opengeofiction.

Hi, I'm a mapper from Spain. I started making maps of cities sience I was 6 years old.

With 14 years I discovered OGF and I received the country Kofuku where I’m right now.

I really feel that this is my passion, so right now I’m studying to become a Road Engineer or Urbanist.

In the ancient times of Harda, approximately 500 BC, a new religion appeared. This is the first known form of philosophy in Harda. It basically consisted on a number of priests that started to think heavily about what lies after death. They did this every day and came up with conclusions that letter formed the early forms of Hardan myths. At later times, the folk culture of the island continued modifying the mythology adding or removing content. Some mythological animals were part of the culture before the death thinkers and others were created in the following years. It’s believed that approximately at the year 0 the mythology was more stable and the major features continued to our current ones without any remarkable changes.

Although it originated across the whole Harda, over time some regions added minor gods. These differences can be divided into three main subgroups. The Bjeri (Kalisanjo) branch, the Grisean (GTC) branch, and the Kofuku branch. The only difference between the branches is that each one holds their own religious capital called “Great Temple” (Like the Vatican for Christians and the Mecca for Islam) 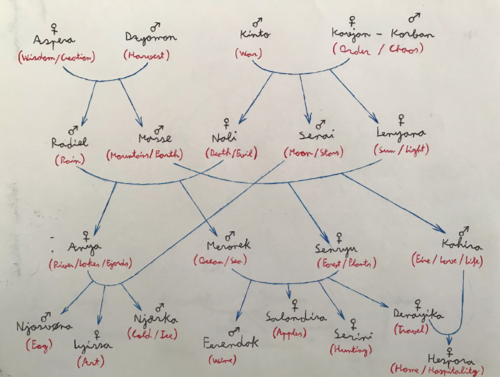 Family tree of the Hardan Gods

In the Harda Mythology we can find tales of a evil future-tellers also known as ”Heksnali”. Those are creatures that were born as human females but were requited by the goddess Nali and turned it into humanoid creatures. They live together in groups from 4 to 15 members in the remains of some abandoned castles or stone-made ruins.

Those women have some special powers: they can see the future, but only if that makes the person suffer psychologically. For example: If you ask “When will I die?” they might answer you “One month after your most beloved son“. You technically have the answer, but that answer will make you suffer from the rest of your life.

There are still a few persons that go to this witches to know something that torments them. They must also pay an amount of gold. This gold helps the witches buy food for themselves for several years until the next client comes.

Many Hardan folktales include these future tellers on their stories. Sometimes described as beautiful women and sometimes as horrible monsters.

Due to the extensive amount of forests on Harda, many mythological creatures live there, including the Walking Trees.

Description: As their name says, those trees can move or even talk by themselves. They do not have face or a mouth, but they produce loud whispers. Their roots and branches look like human arms and legs. Most of them look like old trees on the outside and cannot be differentiated from another normal tree if they are not moving.

Origins: Walking Trees are not born, they are created as normal old trees that at some point have been cursed and come alive. When a child below five years old dies, their soul sometimes is not strong enough to reach the heavens. Those souls are stuck on the earth-world. The goddess Nali/Naly of Darkness collects those lost souls and takes them to the forests. In the forest she gives half of the souls to Hardan Fairies and the other half to the walking trees.

Life: Walking Trees will not remember anything about their past life and simply walk around the forests. The only way for a walking tree to turn back to human is via Masse/Masě the god of earth and plants. By pleasing this god, he may go and search for the walking tree souls and turn them back into humans. Unfortunately, there is a small chance of this actually happening because it’s hard for even a god to find a specific tree between all trees in the massive forests of Harda.

Hardan Fairies are mythological creatures that live in the forests. They can be both male and female and they are normally about the size of a human’s hand. They do not fly nor have wings. To move around they have the ability to teleport across short distances of about 50 meters. In their faces they only have two eyes but no mouth or nose. They can change colours depending on the emotions but are normally green or brown.

Life: Hardan Fairies are really difficult to see. They do not like humans and always will keep away from them. They live together in groups of a few dozen. Their houses are underground - not caves but fancy underground palaces. However, they are not capable of building the palaces on their own. The goddess Nali/Naly builds them for the fairies. In return, a third of the fairies born are sent to the domains of darkness to serve the goddess. The other 2 thirds stay in the forests and serve her as spies.

As in many other mythologies, Hardan Mythology also contains the concept of dragons. There are two recorded types of them. In the early descriptions before the 15th century they are represented having the bodies of a lizard, the heads of a turtle, and the wings of a bird. After the 15th century because of the Ulethan influence found in parts of Harda, they were changed to the standard Ulethan description dragons, but in the areas that remained untouched by the colonising powers, the original description lives on.

Origins: Harda Dragons were created at the same time as humans, but the process of their creation began much earlier. Korban-Kavjan/Qorban-Kavchan, the twin gods of strife/chaos and order/justice saw that humans were too powerful, so he decided to limit them by creating an even more powerful creature. For inspiration they announced a contest amongst the animals to find the most powerful animal on earth. The animal that survives the longest will be the winner and turned into a dragon more powerful than humans. All animals started killing and eating each other. The turtle hide itself on its shell. The lizard hid in between two rocks. And the birds went to the sky so they couldn’t be caught. All the rest of animals died and killed themselves until only the turtle, lizards, and birds were left. No one got out of their hide place. After several hundred years with no progress the twin gods decided to stop the contest and created the dragon mixing the three animals proprieties so it could be the strongest animal in history.

As in many other religions, ancient Harda funerals were made by burning the corpse of the subject over a large and fancy structure of wood. This is because it was believed that the person’s soul will travel to afterlife turned into smoke. The smoke that comes from the fire. This same smoke goes up into the sky and turns into a cloud.

Because of this, the clouds are believed to be our ancestors. They travel flying through the sky to wherever they want in the world.

Ancestors can move down to the world of the living by the form of fog. This allows the people to touch their ancestors. This is considered specially important in the area of northern Harda.

As we see in this whole process there are many gods involved. Nali: God of death, the one that makes people die, Kahira: The God of fire that turns the corpse into smoke, Radirel: of rain that manages the rain of the clouds, and Njosvøna: The God of the fog that helps clouds going up and down to the world of the living.

Cursed Woods are very rare. They are forests where you can get in but not get out, like a black-hole. Once you enter the forest it’s like if you entered a parallel world or reality. Only some humans have managed to get out of them, probably with some kind of magic. No one knows how to come back to our reality because the few people that have managed to come back provided different answers to this question.

When walking through a forest there is an extremely rare chance of reaching an invisible no-return point. Once you cross, reality outside the forest disappears to you, and the forest reaches until the infinite.

On the inside you are likely to die due to the wild animals unless you find other lost humans. The quantity of lost people is so high that inside the forest there are even communities have half a hundred survivors or so. They even manage to build wooden holds or small castles. A curious feature of this magical forests is that gods do not have any reach there. Consequently, they cannot provide stability and monsters or evil creatures moved freely.