Officially Kofuku Republic or Kofuku Raspublikk is a nation located in Antarephia (southern hemisphere), in the southeast of the continent. It borders two countries: Raan and Kalisänjo. Bako-Huz is the capital city and it is located in the northern part of the country. The main language spoken is Ingerish and the native language Darrsian.

The name Kofuku comes from Ancient Darrsian: Kujoku that means “around us”. Through the centuries the letter “o” and the first “u” were switched, passing from Kujoku to Kojuku. In 1210 the king of Darrsia named Kòstadorr Krek announced a language reform where all letters J should be replaced with F. This rule was later reverted but some words such as Kofuku stayed with the new F letter.

The History of Kofuku can be divided into 7 main eras.

The early remains of ancient Kofuku go back until the year 2000BC. The population was formed by tribes of hunters and gatherers. It is believed that these lands could hold humans many years before but there are no evidences of this.

In the 2000BC the main tribes such as the Mai-Kuru, the Ashontes, or the Merinenses, were settled mainly on the fertile valleys and coasts.

Approximately on the year 1000BC it is known that a branch of the Mai-Kuru tribe, called Mekunos, started taming animals and using them for the agricultural hard work. The Mekuno people formed the Greeko Kingdom with capital in Amekumis (Later called Anecumis) The Greeko Kingdom started growing their influence to the rest of the tribes and soon small kingdoms were formed all across the area of current Kofuku.

The Greeko Kingdom formed colonial cities across Kofuku. From 900BC to 600BC it also built a large network of roads connecting the main cities of Kofuku.

The rest of territory that wasn’t under Greeko Dominance was formed by city-states. Mainly administered by the inhabitants in a communitarian way. This is the idea that inspired the current system used in the administration of Kofuku municipalities.

At the same time in northern Kofuku we find the Austrond Civilisation. The ancestors of the Bergensen Norskers Civilisation. Those were aggressive city-states with constant conflicts. The main city of this civilisation was Nikiln.

Around the year 600BC the concept of imperialism appears in Kofuku. Many empires emerged on the following years. The first one was the Narfer Empire that occupied all the valleys on where it emerged.

The most powerful empire was the Darrsian Empire that emerged on Metrocolis at the year 305BC.

The Emperor Sejve started the empire with a massive conquest campaign. After ten years he was able to unify the whole Kofuku under his empire. He died murdered on the year 294BC. After dying, his corpse was moved from Brendan to the outskirts of Bako-Huz where he currently rests in his mausoleum. Because of this the empire stopped their conquests. The Darrsian Empire continued existing until its colapse on the year 340 after christ.

The empire also managed to make infrastructure and commerce across its territory. When the Darrsian Empire falls the Ancient Antehom Era ends and the next era begins. 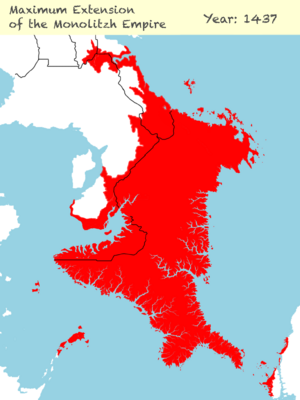 Maximum expansion of the Monolitzh Empire

Origins of the Colony

Before the Empire of Ingerland turned Kofuku into a colony, the territory had suffered several years of very bad harvests. The population was in a famine and Ingerland took the chance of acquiring the control over Kofuku. (wiki: Ingerish Empire).

Diplomats of Ingerland promised to supply the country of food brought by their other colonies. The regions of the north accepted, and seeing that they kept the promise, the rest of regions also joined. In the 5th of March of 1745 the last region (Nordoska) agreed and a new Ingerish colony starts under the official name of “Royal Overseas Region of Kofuku”.

The Ingerish Empire wanted to rapidly integrate the culture and language. They were successful on integrating the language which is currently the most used in Kofuku. Still, the Kofuku culture did resisted. Although it also took parts of Ingerish and Ulethan culture.

Castellán also formed part of the process of colonisation. Tárrases was a colony of Castellán already. Ingerland had more colonies around and managed to block the passing of castellanese boats through the Nordhardian Sea, the sea north of the Harda Archipelago.

Castellán, being surrounded, was forced to answer and started the Nordhardian War. In this war Ingerland lost the block to Castellán but managed to keep all their colonies under their rule. Castellán was able to only conquer a really small island on the Kofuken coast which they named San Juan de Castellán. Castellán didn’t used it as a colony but as one more piece of the mainland territory of the colonial power. The island was used as a resting point and supply port between Tarrases and the rest of the Castellanese empire.