The Former Unionist Colony of Bromley, commonly and simply known as Bromley is a sovereign country located in north-eastern Antarephia, off the western coast of the Asperic Ocean. The country borders New Austland to the south-east, AN137f to the south, AN134e to the west and north-west, and Layr to the north. Its capital and largest city is Bromley City and the country is made up of 6 regions, two of which are considered to be autonomous by the Assembly of Nations.

Bromley was discovered on 4 April 1730 by Captain James Henry Orme, who landed in modern-day Portslade. Orme quickly rounded up black indigenous Bromlavians and forced them to be slaves, who were made to chop wood and build homes for white settlers. A note was delivered via boat to the Ingerish government and monarchy in order to inform them of the new discovery, and Harold Cowper (later made Baron Cowper of Winburgh) was offered the role of Governor. Cowper landed on 21 March 1732, where by this time, new land had been discovered by Orme (now known as Dartleddon, Locksdon and Markenhoe).

On 25 March 1732, Cowper signed the Folkstyne Declaration, which established the new Ingerish colony of Ingerish Bromlaeg, the new capital of New Folkstyne, and Cowper as Governor of the colony. Slavery continued to flourish in Ingerish Bromlaeg, and white Ingerish natives were encouraged to migrate to the colony with a promise of economic prosperity. By the time of the 1814 Ingerish-managed Census, white people beagan to outnumber black indigeneous Bromlavians as a result of a combination of the death of slaves and increased migration of Ingerish settlers.

One such family which owned a considerable number of slaves was the Dahl Family. Ivan Dahl, 1st Marquess Dahl, migrated to Ingerish Bromlaeg in 1750 and later became Governor in 1763. His son, Ivan Dahl, 2nd Marquess Dahl, succeeded him and introduced laws which took slaves' rights away and gave white settlers more power over their indigenous counterparts, before dying in office a 11 months into his term. His grandson, Ainsley Dahl, 4th Marquess Dahl, became Governor 20 years after his death.

After the death of a childless 4th Marquess Dahl in office and the end of the Dahl dynasty, Ingerish Bromlaeg became less stable as a result of the role of Governor being vacated without a trusted successor. As a result, the Ingerish Bromlaegan Army took control of the country while Sir Ashley Wright travelled from Winburgh to take over. There were several small rebellions which were quickly suppressed by the army.

Bromley uses a unicameral system, with politicians regularly meeting at the National Assembly in Bromley City - the current speaker at the National Assembly is Robert Boland. The current Prime Minister as of 21 May 2022 is Wanda Salazar, who is deputised as Secretary to the Prime Minister by Jack Christie - both are members of the governing Bromlavian Labour Party. The current government consists of a left-wing coalition of the Bromlavian Labour Party, Liberal Bromley, Left Progression (formerly Communist Party of Bromley) and Black Voices. The opposition is led by Victor Thatching-Moss and the Bromlavian Conservatives. See Government of Bromley for detailed information

Bromley has had historically had a strained relationship with its neighbouring countries, Layr and New Austland. Minor conflicts often occur across the border, most notably in Kaytown on the New Austland border. Conflicts are usually related to territory and the issue of which country owns which part, with New Austlanders claiming ownership of Kaytown (Most countries recognise Kaytown as being part of Bromley). The Lyrian Government claims ownership of the autonomous region of Barkenfry due to its large Holmic population, while it is internationally recognised by most countries as being part of Bromley. This is a main issue in Bromlavian politics.

Bromley became a member of the Antarephian Coalition in 2015 following a referendum held by Prime Minister Julia Mary Stobart's Labour government, in which 61% voted FOR, and 39% voted AGAINST. This was seen as a turning point in improving Bromley's international reputation and cooperation, but led to several violent protests in more conservative parts of the country due to Layr's involvement in the organisation, meaning that border rules would have to be relaxed, and free movement between the two countries allowed. During a vote to accept Bromley's accession, Layr chose to veto it but then chose to abstain on another vote 2 weeks later, thus allowing Bromley to enter the organisation.

Members of the Antarephian Parliament for Bromley

Heads of State of Bromley

Due to fluctuations in global prices for Bromlavian resources such as gold and wheat, profit is unreliable in Bromley, and relies on foreign competition by attempting to keep its export prices low. This has led to overexploitation of resources, especially gold in western Bromley, which has led to long term environmental damage.

Bromley's currency is the Unionist Pound. In 2006, Prime Minister Ibrahim Idris (Bromlavian Conservatives) and the Exchequer's Chancellor, Abraham Walton, announced their intention to transition from using the Unionist Pound to a new currency known as the Bromlavian Cent. Idris justified this through two reasons: one being that the Unionist Pound is associated with the brutal colonisation of Bromley by Ingerish Unionists, and the second being that Bromley is relying on Ingerland's currency exchange rates for their currency, which is essentially out of Bromley's control. Idris began talks with the Assembly of Nations and Ingerland on 18 September 2005 about a transition of currency. However, a collapse of talks on 2 January 2006 led to a widespread recession in Bromley as a result of companies beginning to phase out the Unionist Pound whilst talks were taking place. A week later, it was revealed that talks collapsed as Bromley did not have the sufficient funds to fund a transition of currency, and the revelation was therefore dubbed as 'Centgate' by the Bromlavian and international media.

When the National Assembly returned from Christmas recess on 9 January 2006, the Bromlavian Labour Party, led by Julia Mary Stobart, organised a vote of no confidence against Ibrahim Idris with the support of some critical Conservative MPs. Following reports that Stobart had the numbers to oust Idris in a no confidence vote, Idris resigned as Prime Minister on 11 January 2006 before a no confidence vote could be confirmed. According to Bromlavian law that no more than two Prime Ministers of the same party can consecutively resign without calling a General Election, one was called in April, and the Bromlavian Labour Party won a massive landslide victory. Labour abandoned plans to transition to a new Bromlavian currency.

Bromley's official national language is Ingerish, owing to its history as an Ingerish colony. The Bromlavian curriculum requires that schools in all regions teach the Ingerish language. There are two regional languages in Bromley: Holmic, which is spoken by families from the Holmic Islands, Layr and the autonomous region of Barkenfry, and Ostafariuan-Je which is spoken by residents of the autonomous region of Westrange as well as descendants from black Bromlavian tribal groups.

Signs in Erbale, Lawrence, Aderlard and Rafferty are mainly in Ingerish. In Barkenfry, it is common for signs to be solely in Holmic, but official road/train signs etc. must be bilingual. In Westrange, this is also the case in regards to Ostafariuan-Je. 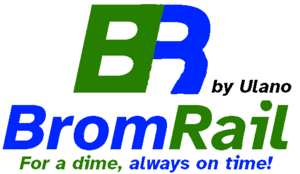 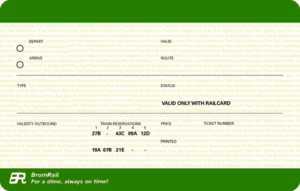 Bromley has a nationalised rail network, covered under the BromRail organisation. BromRail was created in collaboration with the government of Geklinia-Dregolesia, who provided investment towards the project in 1993, in return for trade deals and a 20% share in BromRail's profits. BromRail trains reach across the country and to neighbouring countries such as Layr and New Austland, but are often infrequent and of low quality. An attempt to privatise BromRail was made in 2006, but the events of the Great Bromlavian Recession led to Prime Minister Ibrahim Idris resigning before talks were initiated, and Labour coming to power.