Geklinia-Dregolesia is a kingdom located in Northern Uletha. It borders

Suria, UL14d and UL15i. It has maritime access only through a bay connected to the Great Northern Sea. The country was united in 1915 after the Geklin invasion of Dregolesia. After the unsuccessful 1965 Dregolesian Revolution, the quality of life gaps between Dregolesia and Geklinia started disappearing, which improved relations between both sides. In 1967 an economic union with White Dregovine and Lany was formed, later also allowing free travel between the nations.

In early February 1912, the Lido-Dregolesian militia captured Mirgorod and Chashavinsk. Not a whole month later, on March 15th 1912, the Republic of Dregolesia separated from Lido under the lead of Oleg Syvirianovich. However, the newly formed state was very unstable and quickly after fell into a civil war. On 11th of June 1912, monarchist forces supported by the Kingdom of Geklinia took control over northern territories, establishing a Kingdom of Northern Dregolesia. 4 days later, on 15th of June 1912, anarchist forces rose up south of Molvaty mountains, but failed to capture any major city. Communist revolutionaries rose up on 29th of June 1912 in the industrialized region of Bir and Mizhrichkavsk. The nationalist government managed to defend the most important cities, including the state's capital - Chashavinsk. On 23rd of July 1912, the communist militia organized the Mezhova massacre, where 298 men were caught, sentenced for treason against the communist regime and murdered. The Kingdom of Northern Dregolesia managed to secure major part of Chashavinsk-Ivaniv railway line, which was crucial for the nationalist army on the coast. The Anarchist army finally managed to break nationalist defences in Rychavsk and captured the city on 31st of August 1912, not long after, they were met with communist revolutionaries coming from the north. Bloody battles took place in the suburbs of the city, that lasted for several weeks, when the anarchists, without much support had to retreat and leave the city on 21st of September 1912. 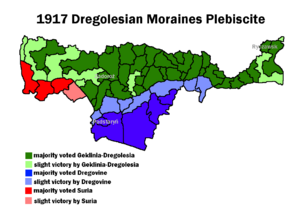 Results of the plebiscite

Geklinia-Dregolesia has a dense railway network. The majority of tracks are owned by a national company, Royal Railway Lines. Services, however, are run by regional operators.