The Assembly of Nations (AN) is an intergovernmental organization made up of almost every country in the world. Its mission is to facilitate communication and to foster cooperation between governments worldwide; to promote international understanding, peace, and prosperity; and to defend the human rights and individual freedoms of people everywhere. To further these ends the AN administers a wide range of programs around the globe, including peacekeeping missions, security collaboration projects, human rights campaigns, economic and social development projects, environmental awareness and protection activities, as well as humanitarian missions for populations in crisis.

The AN headquarters and Assembly building is located on Jada Island, in the Duchy of St. Ricardus∈⊾, within the Kingdom of Pretany∈⊾ since 1966. The AN's other major offices are located in Tsanonba city∈⊾ and Hexagonia City, Tigeria∈⊾.

Present membership includes, but is not limited to the following countries and sovereign entities: 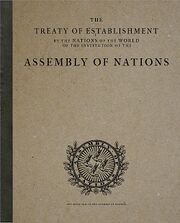 For many decades before the founding of the Assembly of Nations, a number of treaties had established various intergovernmental authorities that focused on specific areas of function, such as the International Postal Standards Bureau, the Global Aviation Coordination Council, the Grand Commission of the Sea, and many more. As the number of these organizations began to proliferate, their jurisdictions would occasionally overlap and disputes began to arise. After a particularly heated diplomatic row, a group of influential world leaders decided to consolidate and integrate a large number of these international functions under one large umbrella organization. 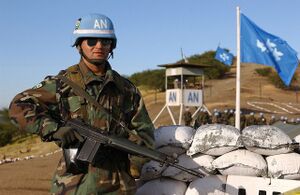 The conference initially convened 1964 and began a prolonged series of negotiations. The Assembly of Nations finally came into being in 1966, with the signing of the Treaty of the Establishment of the Assembly of Nations. Fifty-six separate international organizations were placed under its jurisdiction, their functions strictly laid out so as to complement and coordinate with one another instead of clashing or conflicting. Every sovereign nation in the world, even non-signatories, was invited to participate as an equal member of the AN, and the vast majority did to varying degrees of involvement. 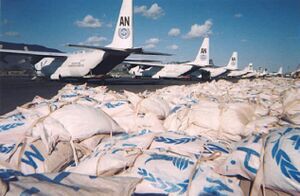 The Assembly of Nations encompasses six principal institutions: the Assembly itself (the primary deliberative body, made up of one representative ambassador from each member nation); the International Peace Council (for matters pertaining to issues of peacekeeping and security); the Social and Economic Council (for the furtherance of social and economic progress); the Chief Secretariat (the general executive of the AN); and the International Criminal Court (the paramount judicial venue). Four of the six primary institutions are located at the AN's central headquarters in St. Ricardus, Pretany, with the fifth being the International Criminal Court, which is based in Tarott, Kalm, and the sixth being the Mandatory Estates Council, which is based in Hexagonia City, Tigeria. There are a large number of other AN-affiliated and related agencies distributed around the world.