This encyclopedia article is about the country in Archanta. You may be looking for the collaboration page.

Deodeca, officially the Commonwealth of Deodeca is a sovereign country in southern Archanta. It consists of 12 provinces that span 685,000 square kilometres (264,000 square miles), making it one of the largest countries in the world. It borders Ardencia and the FSA to the east and south-east, Ambrosia to the southwest, and AR043 to the west. The capital is TBD, and its largest city is TBD. The Ambrosian exclave of Upper Crown (Haute Couronne)∈⊾ sits between the Deodecan provinces of AR060-3 and AR060-4. Deodeca is a member of the Ingerish Commonwealth, having gained independence from Ingerland in UNKNOWN YEAR. It is also a member of the Assembly of Nations.

Deodeca has vast and varied geography that covers a large portion of western Astrasia. Deodeca has extensive maritime borders that extend into the "Sea of Deodeca" and some of the Grand Lakes (Lake Amanecer and Lake Beautouis", giving it an large EEZ.

Deodeca sits mainly within the Cfa and Cfb climate ranges. Some areas experience warmer temperate climates, whereas others experience colder oceanic climates. This is mostly dependent on the latitude and proximity to water of the location within Deodeca. The maritime provinces of Deodeca are most susceptible to high rainfall and strong ocean winds. Ingerish Asperia's western coast is prone to some very strong seaborne storms and breezes due to its positioning on the Asperic northward current. Despite inland Deodeca's distance from the ocean, the number of large lakes allows precipitation to remain fairly high in these regions, allowing for mild and temperate climates to persist.

Deodeca's abundance of water resources is due to its density of water networks. Deodeca has over 200 major rivers. Major rivers include Ingerish Asperia's River Agnes and Umbra River, Peralia's Jersey River, Agawaskway's Frontenac River, and the unnamed major river. The lakes of Deodeca are an important resource, both economically and environmentally. Westhaven Lake, Lake Beautouis, and Lake Amanecer are among the most important and largest lakes in Deodeca. These contribute to inland Deodeca's mild climate and provide water resources for humans and the environment. 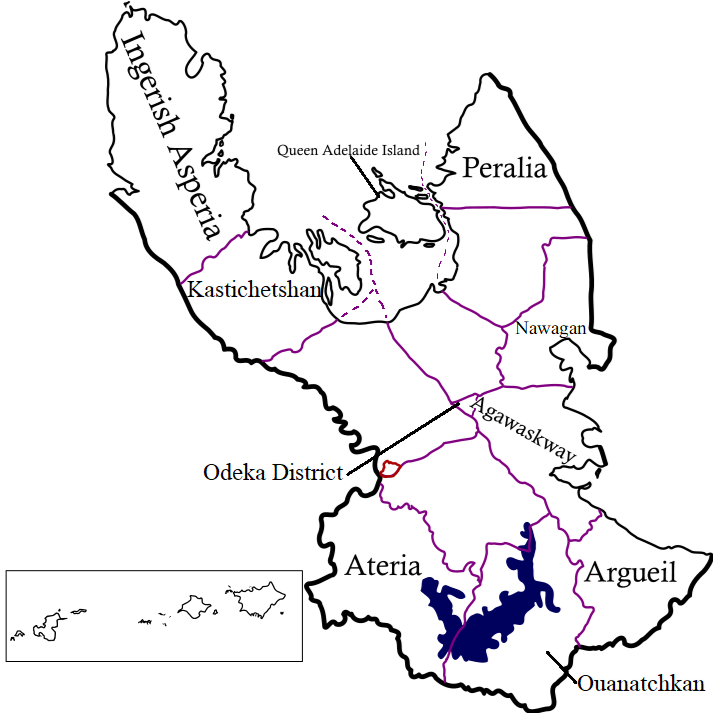 Map of Deodeca and its provinces. The area in red is the Upper Crown (Haute Couronne)∈⊾ exclave of Ambrosia