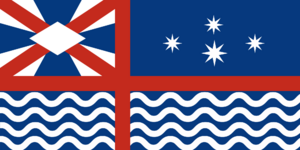 The Province of Ingerish Asperia is a closed collaborative territory in northern Deodeca. It is inspired by the southeastern region of Australia, and the mountainious terrain of NZ's south island. It will feature 4 major cities (designed in an Australian/Canadian style) along with other, smaller cities, and mostly rural regions beyond that. The variety of geography will provide mappers with a wide range of opportunities.

By being a part of Ingerish Asperia you can help decide on the province's:

Ingerish Asperia has a population of around 6-7 million, the majority of whom live in the urban areas of New Reydon (state capital) and Stonesipher. Other population centres include Baptist Bay and Ingerfort.

The first map shows the overall topography of the province (indicated by the mountains) and the hydrology of the province. Mappers wishing to collaborate in a county or city area should take these geographical features into consideration.

The second map shows the human geography of the province and the major roads/railway network. Some aspects of these are subject to change.

The third map shows the administrative layout of the province, which is used for the in-world counties/districts and for the project's assignment of areas for mappers.

New Reydon will be the provincial capital and largest city of Ingerish Asperia and will be based off Melbourne, Sydney, and Canberra. The total metropolitan population of the city will be around 1.5 million.

The way cities in IA will be organised is still being worked-on. Eventually, a system similar to the one in Agawaskway will be in place to facilitate coordinated efforts between mappers in major urban areas.

Stonesipher is the second-largest city in the province. It will be very similar to a Vancounver-type city, given that it is seperated from the rest of the east coast by the central mountain range. It will be a mix of Canadian and Australian urban influences.

Other cities may be mapped as per contributors' wishes, following a well-educated population guess. Smaller cities and towns should not exceed 50,000 people. 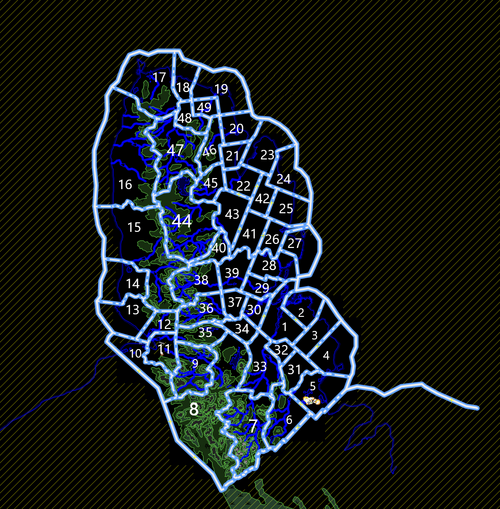 Anyone with an interest in the region is welcome to join the project. Though you are not bound to any single area, you may request to focus your efforts on, and reserve a part of the province, allowing you mostly free rein within it, given certain population bounds and not deleting major highways and railways. Any counties "reserved" in this way will be noted on a list below. Other contributors should not edit within these reserved areas.

Any questions, comments, pieces of advice, or requests to join this project can be directed to User:Arlo via OGF message.