The territories of Deodeca (AR060)∈⊾ are not independent countries. They are provinces within the larger Dominion of Deodeca.

For territory owners here, declaring "independence" isn't an option, so before requesting a province, please be sure you understand the following points:

While it is not a requirement, mappers familiar with -- and interested in -- Commonwealth-inspired mapping are welcome to join. However, we welcome any mappers who are committed to the vision of the project and looking for a collaborative environment to map in. Additionally:

How can I claim a province? 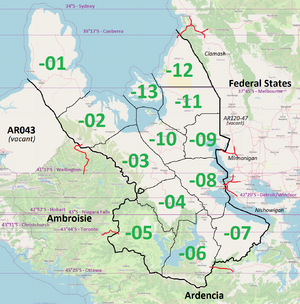 Provinces may be obtained in several ways:

Additionally, two collaborative provinces have been established for users who do not wish to adopt a province of their own but still would like to participate in the larger Deodeca project. Agawaskway is largely inspired by southern Ontario, while Ingerish Asperia is inspired by southeastern Australia and New Zealand's southern island.

The current general regional consensus for the area is as follows; these assumptions were considered as the current plan for Deodeca was created. The details of this history is subject to change as additional mappers join the project.

Deodeca mappers will also be invited to join in applicable conversations and discussions in the FSA and in Ardencia to help create a larger, cohesive region. All mappers should consider their neighbors in other collab projects and owned territories.

New users and interested mappers can message TheMayor for more information about the project.