Paroy (/pərɔɪ/), officially the Republic of Paroy (Franquese: République du Paroy), is a federal republic in the southern part of Tarephia, in the northwest of the Budrian Peninsula, where it connects to the Tarephian mainland. The country is composed of 11 states and a federal district in which the capital and largest city, Coleraine, is located. Other major metropoles include Trevers, Sainte-Hélène, Bluemond and Emison. Paroy is moderately populated, with nearly 35 million inhabitants taking up the country's area of 394,181 km2. The country is relatively urbanised with most large metropoles along both the west and northeast coast. Furthermore, the country is bordered by Freedemia in the south and southeast, Dania in the northeast and Miramar in the east. The most common languages spoken are Ingerish and Franquese. Paroy is a member of the Ingerish Commonwealth, the Tarephia Cooperation Council and the Assembly of Nations. 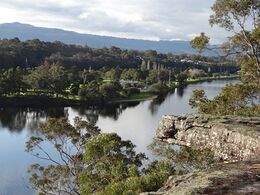 The Ansy is the largest river in Paroy, connecting the High East to the Veronan Coast

Paroy is in Southern Tarpehia, located on the northern end of the Lycene Peninsula, which it shares with Freedemia, Meilan, Miramar and Beldrio. It is also bordering Dania on the north-east. The country is connected to bodies of water on two sides of the country. Paroy lies mostly between latitudes 12° and 20°S, and longitudes 26° and 33°E. Paroy covers 394,181 km2 (152,194 sq mi), consisting for 11.6% of water.