Guai (pronounced /gwaj/), is a country located on the northwestern coast of Antarephia. Guai is bordered to the North by AN136, Oxhano and The Kōpere Bay, by The Koropiko Bay to the East, and by the Hesperic Ocean to the South and West. Its capital is Pirindi and the largest city is Vai. It is a small country of 29,056 km2 (11,219 sq mi) and has a population of about 6 million people.

Guai (oudated Ingerish spelling Gwigh) derives from pre-Taukan root Guo (/gwo/), possibly meaning "fertile plain", and -ai suffix denoting a region or a country, hence, "Land/Region of the fertile plain". Historically speaking, Guai was only the central plain located mostly astride Urán and Astel Cantons. Guai has no official name. Consequently, it is referred just as Guai for all official purposes. 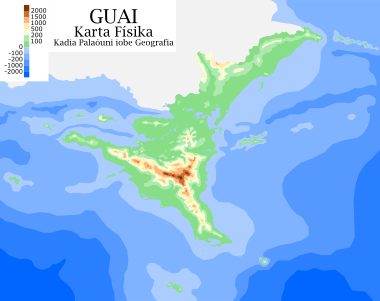 Politics in Guai operates under a framework laid out in the Constitution of Guai. First written in 1848, it made official the system which had been Guai's for over 350 years: a unitary directorial republic. The Constitution was amended many times such as in 1862 to enact universal male suffrage, in 1912 to extend this right to women or 1926 when The National Council's term was changed from four to five years. There are three main governing bodies on the national level: the unicameral National Council (legislative), the Council of State (executive) and the High Court of Guai (judicial). 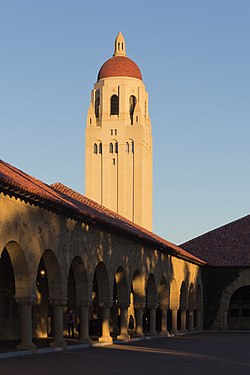 Belfry of the Parliament

The 179 members serve five-year terms, with elections held every five years, or earlier in the relatively rare case that the National Council dissolves itself. All candidates must be at least eighteen year old, there is no term limit. The elections use the mixed-term mixed-member proportional representation, half of the Members of the National Council are elected directly in the 90 constituencies of Guai, the other half are elected from the parties national lists in such a way as to achieve proportional representation for the total National Council, although a party has to win one electoral seat or 5 percent of the total party vote before it is eligible for these seats.

The National Council holds its sessions in the Council House (Guaiian: Tè Tic Rūn, pronounced /tə tiʃ ɾu:n/), located on the top of Kerma Hill in Pirindi. The Council House was built from 1912 to 1920 in a early Art Déco architecture style. Topped by a 90-metre bell tower, the building is the tallest Pirindi. Until 1921, the Council met in the old town in a former patrician townhouse adapted in the early 19th Century to fit its new role. It is now a museum.

The Rūn Mati (Guaiian Tè Rūn Mati, pronounced /tə ɾu:n 'mati/ lit. The State Council), also known as The Council of State in Ingerish, is the fifteen-member executive council which constitutes the national government of Guai and serves as the collective executive head of government and state of Guai.

Guai is a centralised republic. The institutional and territorial organization is chiefly governed by Territorial Reform Act of 1961. This law provides a two-level system with Rov or Canton, and Poro or District (lit. circle). These entities have existed since the late 18th Century with different rights and objectives. Before 1961, Districts were further subdivided into Municipalities or Inda that ceased to exist as political subdivisions on 1 January 1965. Yet, Municipalities as still used for statistics or some local purposes.

Law in Guai is mainly of legislative origin. From the late 19th century, these provisions have undergone a comprehensive process of codification. Death penalty was legally abolished in 1908 and the last execution occurred in 1870.

The judicial system of Guai is divided between courts with regular civil and criminal jurisdiction and administrative courts with jurisdiction over litigation between individuals and the public administration. Appeals can be made to one of the five Courts of Appeal, the High Court of Guai being the final court of appeal in the Guaiian justice system.

This is a list of notable companies with primary headquarter located in Guai.

Aspra Industries (SA), is an Guaiian defence company and weapons manufacturer. It manufactures firearms, ammunition and military technology. Its small arms are very popular throughout the world.

Founded in Koiri in the late 18th century by brothers Emen and Soroi Klaj as a trip hammer factory. Aspra was named after the mythological shield that threw projectiles back at the attacker. A stylized shield still stands as the company's logo.

Since the 1970s, Guai has been operating a nuclear power plant on the shore of the Pórinkon Bay in Táriao Canton. Its 4 nuclear reactors produce about 35%

Traffic keeps to the left side of the road.

Guai is usually viewed as a very socially progressive society. Married women can vote since 1912 whereas unmarried female proprietaries could vote since the 1840s. Traditionally, few legal restrictions applied to women but those have been repelled, step-by-step, in the course of the 20th century. Same-sex sexual activity has never been criminalised and LGBT rights are quite extensive: same-sex couples have been legally able to marry and adopt since 1998. Registered Partnership Law of 1988 apply to both heterosexual and homosexual couples. Vai houses a vibrant LGBT community whereas its northern neighbourhood Djima is famous for its annual Pride Parade in early December. Social equality is quite central in Guaiian culture. The country has always been a republic or a set of semi-independent republics and privileges and rights of the upper bourgeoisie vanished in the mid and late 18th century.

Until at least the first half of the 20th century, dominant belief in Guai was called Ohoism, an amalgamation of religio-philosophical traditions that has a significant impact on shaping Guaiian culture. Since then it has steadily declined and today Guai has one of the least religious populations in the world.