Saviso (/səˈviː.zoʊ/ sə-VEE-zo), is the capital and most populous city of Vodeo and the province of St Austell. The metropolis is located on Vodeo's south coast approximately 130 kilometres south-east of Greville and 154 kilometres north-west of Gerrise, and is situated around the Saviso and Caipah Harbours. As of 2019, Saviso's estimated metropolitan population was 5,516,900, making it the world's eleventh-largest city and the fourth-largest in Tarephia behind Latina (Ciudad), Cordoba, and Teşhir.

One of Vodeo's oldest cities, Saviso was founded in 1627 as part of Ingerland's colonial expansion south from Cambria. Initially little more than a farming village on the southern shore of the Saviso River, Saviso began to prosper after the nearby town of Harefield was devastated by fire in 1638. In 1651 Saviso was chosen as the administrative centre of the new colony of St Austell, and by 1700 had become the largest city in the Ingerish eastern Tarephian colonies outside Holme. Having grown wealthy through the sugar trade, the city was hit hard by the economic impact of the Ingerish Civil War, and in 1725 was the site of the Saviso Rebellion, which led to the independence of St Austell from the Ingerish Empire. As the city grew it became one of the Sea of Uthyra's principal trading centres, and in 1874 surpassed Holme as Vodeo's largest city.

Today Saviso is Vodeo's most important financial, economic, and cultural centre, and is consistently ranked as one of the world's top fifty liveable cities. As the capital of both Vodeo and St Austell, the city contains a number of notable cultural, political and legal institutions, including the Parliament of Vodeo, Saviso Cricket Ground, the St Austell Concert Hall, Saviso Art Gallery, the Dominion Museum, and the national and provincial justice systems. It hosts major annual international events, and also hosted the 1926 Ingerish Games and the 1960 Summer Pax Nova Games. Saviso consistently ranks as one of the world's most liveable cities.

Saviso takes its name from the Saviso River, upon the banks of which Saviso was founded. The name Saviso is of Beha origin, translating as "gentle water", a reference to the river's calm flow. Contrary to popularly held belief, the city does not take its name from Saviso Harbour, rather the reverse is true; for much of the 17th century the harbour was known simply as St Austell Harbour, with "Saviso Harbour" only becoming common around the 1690s and 1700s. 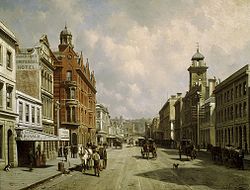 The Saviso area had been known to the Rhysiogan settlers of New Cambria, but it was not until Ingerland took possession of the colony that expansion southward became viable. In 1622, the colonial administration was directed to find a suitable area for the construction of new settlements to the south of the Gulf of Havilland. The small fishing village of Cockleford was the first to be established, in 1623, followed by nearby Harefield in 1624. While initially promising, poor soil and limited water supplies constricted their growth, necessitating further exploration. The area around the confluence of the Saviso River and the Tahara Stream was deemed most suitable, and Saviso was founded in 1627.

Saviso is home to the largest number of museums in Vodeo, and has the second highest number of art galleries behind Holme, giving it the nickname "The City of Museums". The Dominion Museum, Vodeo's national museum, is located in the city centre on the corner of Adelaide Quay and Marlborough Street, while the National War Memorial is located across the river in Aslington. Other notable museums and galleries include the Saviso Art Gallery, the Museum of Parliament and the Museum of Liberty in Aslington, and the Immigration Museum in Caleigh.

In total, Saviso contains the following museums and galleries:

Saviso's nightlife has been celebrated as among the most vibrant and diverse in the world. Southbank has established itself as one of the world's most famous nightlife destinations, with the highest concentration of bars, clubs, and restaurants in Vodeo. Music clubs, ranging from traditional jazz to more modern trance, rock, and hip hop, have been a staple of the suburb since the 1920s. St Kitts became a haven for the city's LGBT community in the 1960s and 1970s, and a number of gay clubs and bars, some dating back to the 1950s, remain in operation. Southbank and St Kitts are both famous for being the city's main red light districts.

Saviso is served by four daily newspapers, The St Austell Telegraph (broadsheet), The Advocate (formerly broadsheet, now compact), The Chronicle (national tabloid), and The Dominion (national compact). In addition to these the city also has a number of community and suburban newspapers, including several published for the city's non-Ingerish-speaking communities (most notably those speaking Castellanese, Franquese, Khaiwoonese, Myrcian, and Maurit). Saviso is also one of the printing locations for many of Vodeo's national magazines.

Saviso is served by Vodeo's three main television networks (VBC, National, and Standard), all of which are broadcast in digital from the antenna atop the Dominion Tower. Saviso is also served by two community stations, SATV and Channel 15. Pay television is also available via cable, satellite, and IPTV.

Radio stations in Saviso include the major commercial stations including Compass, 5AA TalkRadio, The Rush, Go FM, The Pit, Zone Sports, Double Zed 98, Radio 3, and 5GM, in addition to community stations such as Pride FM 102, 5XYF Saviso, and Access 104.4. The VBC transmits all five of its radio networks to Saviso: VBC Dominion, Radio Vodeo, 5CE, VBC Concert, and Radio Gold.