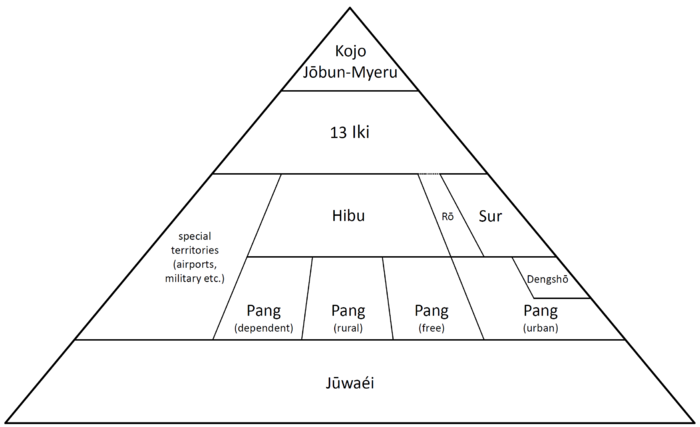 This article aims to give a comprehensive overview over all administrative subdivisions of The Republic of Kojo.

Sur translates to "city". Every municipality that is larger than 100,000 inhabitants for 3 consecutive years can be granted this status, and every single city in Kojo has taken this opportunity. The remaining areas of an Iki are organised in Hibus ("district"). While a Sur is just one single city, a Hibu integrates all other settlements from tiny villages to towns of up to 99,999 inhabitants. In a Sur, citizens elect a city council as well as a mayor. The Sur is responsible for all matters that municipalities are entrusted with under the Kojolese constitution. On the other hand, in rural areas citizens elect both a local council and mayor for their municipality (Pang), as well as a Hibu-council and Hibu-chief. Depending on the capability of the municipality, some duties are performed and controlled on the Hibu-level, and the others are dealt with in the local communities. Generally, Surs and Hibus (and in the latter case to some degree the constituent municipalities) are the only administrative subdivisions in Kojo with a constitutionally granted degree of sovereignty and local elections.

A "Jūwaéi" either encompasses a small city quarter or block in an urban Pang, or a neighbourhood or small settlement in a free, dependent or rural Pang. Jūwaéis are the smallest contiguous units for forming electoral districts or other official boundaries. They also pose as the smallest statistical unit in official publicised data and are the basis for land surveying.

Jūwaéis are identified by a unique number in each municipality. In small villages, this could mean a plot of land is identified as "Jūwaéi 164" with parcels being subdivided by adding additional numbers after a dash. In larger municipalities or after territorial reforms, numbering systems can be more complex. Jūwaéis are not mapped or mentioned in the listing below.

The GMNHI ("Gōzo ko Myingsamolno so Naelnimyue so Harefan nijúinde Índae"; "Index of the Ministry of Labour and Social Issues about Neighbourhoods") is an index on a numeric scale from 0.0 to 10.0. It is most frequently used to compare the socio-economic status of neighbourhoods or similar territorial subdivisions in Kojo. It was developed by the Kojolese Ministry of Labour and Social Issues and is calculated by the Agency for Statistics for every Pang and most Jūwaéis in the country based on municipal data records.

Because the indicator does not take into account the variance of these figures inside an area, it should be used for sufficiently small areas that are more or less homogenous. For example, a neighbourhood consisting of one very affluent and one struggling half would appear to have a mediocre score overall, which could lead to a mischaracterisation of the area. The score is intended to enable planners and policy-makers to better address local needs. It is not suitable for macro-economical analysis or comparisons of cities or regions among each other. The GMNHI is generally seen as a good indicator with regards to the "feel" of a neighbourhood and is therefore commonly used on real estate websites and alike.