The Bay of Forrintia is a gulf of the Ardentic Ocean. It is formed by a curvature in the southeasterly coast of South Archanta (also known as Astrasia).

Numbers 4 and 5 indicate the Astrasian Stream

The Astrasian Stream, a major current of the South Ardentic Ocean, enters the Bay from the northeast, following the continental shelf's border anti-clockwise. These warmer waters originating from the tropics create the temperate maritime climates found in the coastal regions around the Bay.

Due to recent changes in territory locations and the AR045 collaborative project, this geographical description is incomplete. References to countries that have moved have been removed. Someone in AR045 will likely need to update it at some point.

The southernmost point of the Bay of Forrintia is a cape at the easternmost point of the X. The coast runs northeast, then east to the estuary of the X, which is large enough to form a bay of its own. After this, the coast of the Bay of Forrintia turns north for around 40 kilometers; it is at this point that the border between the meets the sea. Shortly north of this border, the coast heads in a northeasterly direction (punctuated by bays and river deltas). It continues this overall direction along the coast of the province of Bas-Chanceux, gradually taking a more easterly direction as the coasts of X, Andasonia, Brieland, and Spero. Point Manauk, in Spero, is considered by most geographers to be the northeastern most point of the Bay of Forrintia, although the exact boundary between the Bay and the Ardentic Ocean has not been formally established.

The continental shelf extends a relatively short distance into the Bay in most places, which results in deep waters and relatively calm seas.

Major rivers that empty in the Bay of Forrintia include the , the Grange River, the Ewa, l'Éfée, Saint Martha's River, the Makeoverly River, the Bull River, the Stern River, the Indigo River, and the Green River. 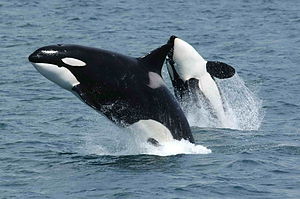 A leaping orca (Orcinus orca) in the Bay of Forrintia (Photo: R. Pittman)

The Bay of Forrintia is also famous for the abundance of cetaceans in its waters. Many species of whales and dolphins have their feeding and calving areas in the bay. Most importantly, it is one of the two places where the Astrasian Grey Whale has been observed relatively frequently. The Astrasian Grey Whale (Eschrichtius astrasis) was nearly hunted to extinction from the early 18th to the mid-19th Centuries and largely disappeared from the bay, but their numbers have since come back. It is believed that the bay has once again become an important area for calving of this species of Whale.

The best areas for the observation of whales lie in the deep waters beyond the continental shelf; dolphins and orcas, however, can been found close to the shores and are even frequently spotted in the mouths of the rivers that empty into the Bay.