Empire Coffee is a Vodean tea and coffee company and coffeehouse chain. Founded by Michael Ballantyne in Saviso in 1949, the company was the first coffeehouse chain to operate in Vodeo, and is today of the largest coffeehouse chains in the world. The company mostly uses Vodean-grown tea, coffee, and sugar, only purchasing foreign materials to make up any shortfalls, and is the country's second-largest consumer of those crops in Vodeo behind the domestic market. 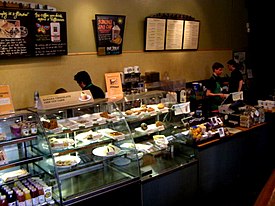 A typical food display and beverage preparation area, this one in Kingsbury, New Ingerland

The first Empire Coffee opened in Caleigh, Saviso on October 19, 1949, by Michael Ballantyne and George Ivitt, who had met in the army in 1942 and had gone on to study together at the University of Saviso. Their first location was on the corner of Lachlan and Pavilion Streets, an ideal location given its close proximity to the university, the university's medical school, and the Royal Saviso Hospital. The cafe initially offered only tea, coffee, and three kinds of sandwiches - ham, egg, and cheese. The cafe's fortunes were boosted when doughnuts, then nearly unknown in Vodeo, were added to the menu in 1952 following a visit to the Federal States by Ivitt. Upon returning, doughnuts were added to the menu, prompting a craze that quickly spread across the country.

The attention and profits that the craze brought the cafe allowed Ballantyne and Ivitt to expand to a second location on Stock Square by the end of that year. In late 1953 the first franchise locations were opened, and in 1954 the first cafe outside St Austell opened on Aulsebrook Street in Gerrise. Empire Coffee continued its expansion across the country during the 1950s and 1960s, and was present in all ten provinces by 1966 when it opened a store in Radern, Vadiorare.

In 1975 the company opened its first overseas store in Ingerland, followed by Latina in 1977. Empire Coffee's first store in the Federal States opened in 1984, and despite strong competition from already established chains, began expanding across the country in the late 1980s and 1990s. The company began opening stores around the world in the 1980s and 1990s, and in 2005 opened its first store in Myrcia, one of a small number of foreign companies permitted to operate in the socialist country.

Empire Coffee locations serve hot and cold drinks, whole-bean coffee, espresso, teas, juices, smoothies, and food such as pastries, sandwiches, baked goods, and ice cream. Empire-brand coffee, tea, pastries, ice cream and bottled cold coffee drinks were introduced to Vodean supermarkets in 1998, and have since become available in grocery stores throughout the country. Beginning in 1995, some larger branches have added bigger meals, such as breakfasts, burgers, and pasta, to their menus; some stores outside Vodeo also offer selected local cuisine. The All-Day Big Empire Breakfast was added to the menu in 1997 and has since become a cornerstone of larger stores' menus.

In recent years, Empire Coffee has introduced measures to make their business more enviromentally friendly. In 1997, Empire Coffee began offering leftover coffee grounds to customers for use in their gardens, although participation is not mandatory among all stores, and some smaller stores do not offer them at all. In 2000 the company introduced a recycling programme in all of its stores, with recycled paper being reused as part of the company's disposable cups. Empire Coffee-branded reusable cups were introduced in 2002, with customers given a 5% discount for using them - this was expanded to all reusable cups, not only Empire Coffee's own, in 2007 following public demand.

Empire Coffee introduced a line of fair trade products in 2001. In 2009 the company began donating all unsold food from its Vodean stores to food banks and charities, with the program rolling out to some international locations in 2014.

Empire Coffee's size and prevalence within Vodeo has made it a prominent feature of Vodean life, and its prevalence in the tea, coffee, and doughnut market has led to its adoption as part of "Vodeana" — that is, as a Vodean cultural icon. A series of television commercials introduced in 2010 portrayed Vodeans abroad and their homesickness for Empire Coffee to great acclaim. Empire Coffee is considered to be one of Vodeo's most notable corporate ambassadors internationally, alongside Cobalt, Colour, and Dominion Air.

Empire Coffee's ubiquity also saw it included in a 2013 episode of the comedy series Too Much, in a sketch parodying the 1983 film Radiation: set in the ruins of Saviso after a nuclear war, the protagonists find an Empire Coffee store has been set up in a ruined building, with a long line of people queueing up to get their first coffee since the city's destruction only a few days before.