Laneston-Vandover is a large city located in the northwest corner of the United Freedemian Union. Laneston-Vandover has a population of about 2.4 million, and with a recent tourism boom, population is growing even further in the area. They city was founded as two separate cities, Laneston and Vandover, but because they are so close in proximity and culture, they were often viewed almost as one city or as one very cohesive metropolitan area, and would officially merge into one city in 2016. Together, they make up one of the largest metropolitan areas in Freedemia.

With recent federal protections on public naturism and social nudism, resulting in a boom in tourism, the Laneston-Vandover metropolitan area is becoming a world destination for its pristine naturism-friendly beaches and its parks and greenspace.

Laneston was originally the larger of the two cities in the Laneston/Vandover Metropolitan Area and the capital of Reeds state. It is home to Freedemia's largest harbor and acts as the port city for most incoming sea shipments (especially non-industrial shipments, which usually end up at Haroldsborough Seaport).

Vandover is Freedemia's biggest beach city. Vandover Beach attracts tourists from around the world to enjoy the free nude and clothing-optional beaches. Behind Quentinsburgh it attracts the second largest amount of Freedemian international tourists, and the most beach tourists by far. Vandover is the naturist capital of Freedemia, and is often considered the naturist capital of the world. 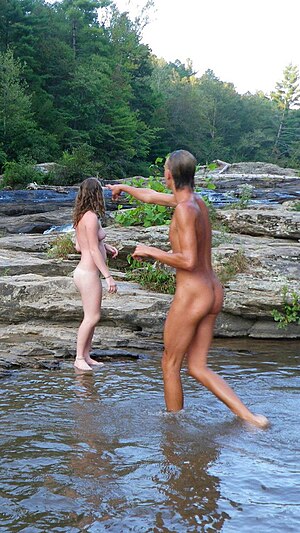 A group of people enjoying a smaller beach in South Laneston.

Overall, the metropolitan area is especially known for its beaches. Located along the western part of the cities, world-famous Vandover Beach and smaller but equally nice Laneston Beach are beautiful beaches, the largest in the country, and they attract huge amounts of people from around the world. The Vandover Boardwalk is an icon of the area.

There are also huge beautiful waterside parks surrounding the huge mouth of the Reeds River, namely Jasmyne Park and the bigger Laneston Park. The smaller Coastal Laneston Park divides Laneston Beach neatly in half, while taking advantage of the beautiful beach surroundings. World famous and huge Lynn Vandover Park along the coast is a beautiful gigantic park that tourists love. Other parks, like Rowland Park in the east, are quite popular (within the area at least) as well.

Due to Laneston-Vandover's rich heritage in naturism and social nudism, many take advantage of the greenspace and beaches for nude recreation. On any given day, nude picnics, nude sunbathing, and even families just going for a nude bike ride or stroll are common in parks, beaches, and public squares across the cities.

The East Laneston area is sometimes affectionately called "Lollywood" due to its large presence of movie production companies. Betterview Pictures, famous for clean family movies and television programming is based out of Laneston, as well as other companies like Progress World Network (PWN)'s parent company, Progress World Broadcasting. Carleigh Films/Nudifilm Studios, known for being a somewhat controversial company worldwide due to their movies and shows often containing uncensored nonsexual nudity, is also based out of "Lollywood".

While the area has always been huge for tourism, it has grown much more very recently. Freedemia recently passed an amendment protecting naturist rights, encouraging naturist tourism to boom. International tourism shot up, as the Laneston-Vandover Chamber of Commerce was able to actually grow the naturist culture and encourage naturist tourism. Thousands are attracted to the beautiful naturist beaches each year, and that number is only going up. An increasing amount of naturists are moving to the area as well, increasing the concentration of naturists and helping the area grow further. 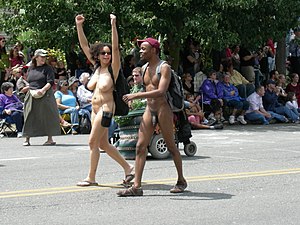 A couple enjoying the weather while taking a nude stroll in Vandover.

As mentioned before, much of the area's culture surrounds the beach environment and the embracing of naturism.

Statue of a nude female in Vandover.

Statue of a nude male in Laneston.

A group of people enjoying a nude bike ride through Vandover.

A couple barechested in Laneston. This is not unusual in Laneston-Vandover, or even in Freedemia as a whole, where barechested equality has been valued for most of the country's history.

One of the many barechested/nude performances in the Laneston/Vandover area. This particularly is the popular local band the Geewhiz, which specializes in alternative/anti-folk.

One of the main reasons Laneston-Vandover gets so much beach and park tourism is because of the area's roots with naturism. Naturism has always been legal on Laneston-Vandover's beaches, and it has only expanded since. Laneston and Vandover both made naturism publicly legal citywide in 1994, and the Freedemian Tricameral Legislature recently passed new protections making it publicly legal nationwide. Between the sweltering daily yearlong heat and the culture that is extremely accepting of nudity, the area was ripe for nudity and naturism to make a huge impact on the area. The two cities are home to the largest naturist populations in Freedemia- in a poll done in early 2015, about 70% of residents were naturists, and about 34% of that 70% enjoyed naturism in public spaces like parks and beaches at least weekly. Laneston and Vandover's culture in naturism and their beautiful beaches and greenspace attract thousands of naturist tourists each year.

Part of an nude performance exhibition at an art gallery in Laneston.

A body painted art group at the 2015 LanDover Bodypainting Festival

Casual Bodypainting at an event in Vandover.

Painted on clothes, common around Laneston and Vandover.

As in the rest of Freedemia, breasts are not considered nudity and are equally treated with men's chests. Men and women alike go barechested daily, whether that's walking down the street, going to a restaurant, or relaxing at a beach.

Bottomlessness has become more common and more culturally accepted over the years, especially with Amendment 30. While women in the area are more likely than men to go bottomless according to FreedemianLifestyle magazine (32% of women going publicly bottomless compared to 9% of men), both men and women can occasionally be seen bottomless, especially at area parks and businesses.

Women especially go bottomless a lot in casual area sports, wearing just a sports bra or sports top. The Laneston/Vandover city sports programs and school leagues however, do not allow bottomlessness for their female athletes. The debate has been ongoing since 1997, when Allana Ghent complained that her shorts were a distraction from her running track. To date about 43 females have tried to go bottomless in protest of the outfits and for the allowance to be added. Almost none faced punishment after the city recreation league got attacked by the public for allowing the team to suspend Geraldine Kness for taking off her pants and going openly bottomless during a baseball game against Quentinsburgh's youth team in 2001. However, the requirement to wear bottoms persists.

After the passing of Amendment 30, like in the rest of Freedemia, no businesses have "no shirt, no shoes, no service" rules other than those that would need it for sanitary or safety reasons. The Laneston and Vandover area is especially known for its citywide "no shirt, no pants, no clothes, no problem" law that effectively covers every private business in the city, requiring all of them to accept all forms of non-sexual nudity or partial nudity such as bottomlessness, including the controversial places like restaurants and grocery stores, though many places still require shoes or at least slippers. Many have started providing slippers as a courtesy to their nude or mostly unclothed visitors.

Nonetheless, bottomlessness is less common than barechestedness or complete nudity.

Nudism in Culture and the Arts

Nudism is a huge part of the cities' culture. Nudity abounds in art, including statues, murals and paintings and is very mainstream in these two cities. Laneston and Vandover are known for their extremely high populations of naturists, as mentioned earlier. As in the rest of Freedemia, inappropriate behavior is greatly frowned upon, helping to act as an incubator for a naturist society. Discrimination against nudity is looked upon very badly. It is not unusual to see naturists put on plays or do concerts and performances unclothed in public, as it is a very large part of the culture and the arts in the area. Laneston and Vandover are often seen as the heart of "Naturist Culture", as it is the one area where naturism is not only accepted, but truly embraced.

Laneston and Vandover also have a long history and heritage with bodypainting. Between performance art, intricate art-filled designs, social statements, and casual bodypainting, bodypainting has become a part of the fabric of "Landoverian" culture. Some bodypainting is done over a minimal amount of clothes such as a bathing suit, while other bodypainting is done directly on the nude body. There are even artsy bodypainting boutiques throughout Laneston-Vandover where people can go to get painted on clothes or artsy designs either painted over their clothes or on their body. Bodypainting/painted on clothes chain BoPa Outlet (short for Body Painting Outlet) is the largest such chain, actually operating with locations in malls across the metropolitan area and plans to expand, while a couple others like Nakartsie are more the high-end "designer" bodypainting botiques with well-known bodypainters.

A 2014 survey by FreedemianLifestyle magazine showed that on any given day about 20% of the residents of Vandover and 9% of Lanestonians wore bodypaint publicly with minimal or no accompanying clothes. About 60% of those individuals wore painted on clothes, while 30% simply had creative designs that covered areas like the nipples and genitals and 10% had creative designs that didn't cover anything. Painted on clothes were the most popular for students and employees.

According to the same survey, another 10% of Vandoverians and another 4% of Lanestonians frequently wore what was categorized as nude fashion, designs in ribbon, paint, flowers, jewelry, lace, etc on the otherwise unclothed or partially unclothed body that creates a fashion aesthetic. It should be pointed out that in Laneston-Vandover this is generally for a fashion/style/individuality purpose, and is not intended to be sexual or provocative.

Laneston-Vandover is also expanding a network of bike and pedestrian paths/greenways to connect through the city.

VAULT, or Vandover and Urban Laneston Transit, is the area's main transit system, operating an expanding metro system and an extensive bus system.

Laneston and Vandover are home to several unionways, with U-4 being the most prominent. Laneston and Vandover are also connected to several other Freedemian cities and Walter Sanderson International Airport by FreedemiRail and the VAULT-operated VCommute system. FreedemiRail also connects the city with Sean Bond International Airport.

...connects to Nature in the north, Quentinsburgh in the south...

Laneston-Vandover, especially in the Vandover part, are generally seen as the odd place out among the rest of Freedemia, largely due to the unusual embracing of nudity and other unusual ideas not seen anywhere else in the country. Freedemians from other parts of the country are known to use phrases like "Only in Vandover", "as strange as Vandover", "as nude as Vandover", "a Vandoverian level of weird", etc. While all of Freedemia is vaguely accepting of natural nudity, the Laneston-Vandover area stands in direct contrast to many other parts of Freedemia, who tend to be more conservative-moderate about when nudity is appropriate, even though nudism is widely accepted and practiced.

Worldwide, however, Laneston and Vandover's unique way of life and culture are somewhat appreciated, largely from the tourism standpoint.