The area of modern-day Mazan formerly consisted of the Ezrat Empire and Mazanic and Zinakhtiyyin Tribes. A large portion of Mazan (and parts of Castellán) was a part of Ezrat Empire for more than a millenium, becoming a major power in West Uletha and Tarephia during the early modern period. The Ezrat Caliphate started in the 6th century and is still present till today. After its decline in the 16th century, different parts of modern-day Mazan were governed in different strategies and ways.

The Sultanate of Mazan was founded in 1850 by Ibn Maz. He unified the remaining lands of old Ezrat after the great decline of the Caliphate.

Mazan name is derived from ma(ماء) the word for water and samin(سامان), which is land. This is because of the importance of the holy water that was found in Maad in the 7th century. Soon it would lead the land being caled maza. Although for a period it was known as Ezrat which is just from the word for this land: ard(أَرْض). Following the collapse in the 14th century after its millennial existence, the name was then replace by the name that would soon become Mazan.

The Caliphate of Ezrat was established in 650 A.D. in the centraleastern region of Mazan. It was based out of the city of Tabah. It border many tribes to the northwest. This empire was ruled by Al Siddiq, founder of Ezrat. The Capital was transferred later into Asharia were the land was more arid and it was closer to Castellan which would later be conquered and annexed to Ezrat.

Mazan's climate ranges from highland, to subtropical to arid. In the central lowland desert going south and east, it has a hot arid climate with average high summer temperatures exceeding 41°C (105.8°F), and low annual rainfalls of 356 mm (14 in). The south of the country experiences higher temperatures. In Riyal, the hottest place in the country, temperatures are over 50°C (120°F). Winters are warm with high temperatures around 20-30°C (68-86°F). Going north around Wavkara and Damasra, the climate changes of humid subtropical with mild winters and warm summers. Towards Barsas, the climates becomes continental, with colder winters.

Mazan is a federal constitutional monarchy where the power is equally divided among the state's powers (sultanate, deputy minster, and the houses). Although constitutional, the Sultanate is a hereditary position and holds wide executive and legislative powers. He serves as Head of State and Commander-in-Chief and appoints the executive branch consisting of the Prime Minister, the Cabinet of Mazan, and governors of the individual state.

The Parliament of Mazan consists of two chambers: the Council of the State (Majilys el-Daula) and the Deputies' Chamber (Gharif Linwab). All 75 members of the Senate are directly appointed by the King. Of the 150 members of the House (as of 2013), 108 are elected from the 12 governorates while 27 seats are chosen through proportional representation on nationwide party lists. Also, as of 2012, women have been admitted to serve on the council and the deputies (there are currently 13).

Rissan is the region where Mazan and Castellán shores meet. The capital is Aljaraf. It’s the zone with more castellanese immigration. The second main city name is Armid that means “The Red Roofs City”. Rissan is a well known region of Mazan because it haves a lot of water. 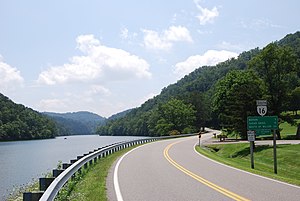 R-16 Road in the Asmar Reservoir
The Asmar Water Reservoir and Al Baser Water Reservoir are the biggest reservoirs in the country and very big compared to the worlds average size of reservoirs. The Rissan Rivers crosses all the region until its delta in Aljaraf. The R-16 is considered to be one of the most dangerous roads in Mazan. This is because the asphalt is just 1 meter above the water level and 2 meters from the shoreline.

As of 2015, Mazan is a developed, free-market economy. Also, it is also the largest economy in the world with a GDP of $10 trillion dollars. Despite the diverse economy, a large portion of its economy relies on oil, natural gas, gold, and diamonds. Other major contributors include mining, banking, tourism, telecommunications, finnance, and manufacturing.

As a prosperous capitalist state and social democracy country featuring a combination of free market activity and large state ownership in certain key sectors. Public health care in Mazan is almost-free (after an annual charge of around $230 for those over 16). The state income derived from natural resources includes a significant contribution from petroleum production. Mazan has a very low unemployment rate, currently 2.6%. 69% of the population aged 15–74 are employed. People in the labour force are either employed or looking for work. 9.5% of the population aged 18–66 receive a disability pension and 30% of the labour force are employed by the government. The hourly productivity levels, as well as average hourly wages in Mazan, are among the highest in the world.

Mazan is home to 376 million people according to its 2012 census. Also, from a recent estimate states that the Mazan has exceeded 380 million inhabitants, making it the most poluated country in the world. Ninety percent of the people are ethnic Mazanic and ninety-two percent were born in the country. Nearly ninety percent of whom lived in towns and cities. According to the 2011 estimate, the population is increasing by 1.35 percent each year. Mazan has an average population density of 165 people per km². People within the 15–64 age group constitute 70.4 percent of the total population; the 0–14 age group corresponds to 22.3 percent; while senior citizens aged 65 years or older make up 7.3 percent. In 1927, when the first official census was recorded in the Sultanate of Mazan, the population was 113.6 million. The largest city in Mazan, Khama'ata, is also one of the largest cities in Uletha in population. Other populated urban centers include Tehmahd, Hattir, Cauai, Kalgharab, Omara, and Nuggadha.

Under the constitution, the official language of the of Mazan is Mazanic, which almost all of the population speaks and is virtually the only language used in newspapers, radio, television, and for business and administrative purposes. Based of the 2012 census, Ninety percent (or 339,122,377) of all inhabitants of Mazan primarily speaks the language. Also, there are several regional languages that makes up 4% percent total. These regional languages include:

Education in Mazan is overseen by the Sultanate's Department for Education and Department for Business, Innovation and Abilities. Local government authorities are responsible for implementing policy for public education and state-funded schools at a local level. School attendance, or registration for home schooling, is compulsory throughout Mazan. Education is the responsibility of the individual states and territories so the rules vary between states, but in general children are required to attend school from the age of about 5 up until about 16.

Higher education students normally attend university from age 18 onwards, where they study for an academic degree. There are over 150 universities in Mazan, all but one of which are public institutions. The Department for Business, Innovation and Abilities is the government department responsible for higher education in Mazan. Students are generally entitled to student loans to cover the cost of tuition fees and living costs. The first degree offered to undergraduates is the Bachelor's degree, which usually takes three years to complete. Students are then able to work towards a postgraduate degree, which usually takes one year, or towards a doctorate, which takes three or more years.