Odrava [ˈodrava] (listen); Ingerish [ˌɔʊˈdrɒva:], Gaerman Odrau is the capital and the largest city in Drabantia. It is located in the south of the country at the mouth of the river Borava near the Egalian Lake. The city is home to about 840,000 people and has a temperate climate with warm summers and dry, cold winters.

Odrava has historically been an important trade and transport hub. Thanks to its convenient location, the city has been an economic and cultural center of the whole region since the Middle Ages, later gaining the nickname The Heart of Central Uletha. However, during Drabantia's monarchy era, the royal seat was Krále Hora. Odrava became the capital city with the installment of the republic in 1915. Although the city underwent radical changes in the late 19th century, many historical buildings were preserved in the city center. The historical center is listed as an Ulethan Heritage Site and is the most visited tourist attraction in the country.[1]

The name Odrava comes from the Old Escadian word odrj, meaning "barley", and the suffix -ava meaning "water", i.e. barley water, likely referring to the city's location on the river Borava and the crop traditionally grown in the area.[2] Both items can be seen in the city's coat of arms.

A popular alternative explanation of the name suggests the name comes from dravý "predatory", indicating the presence of a wild running river.[3] However, the only major watercourse in the area is the river Borava, which, approaching its estuary, flows rather calmly and slowly. 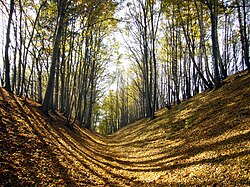 Remains of a sconce at Růžový vrch

Historical cellars are among the things that survived the 1378 attack

Archeological findings indicate the area could have been settled as early as 2000 BCE. Escadic tribes dominated the area between the 1st and 3rd century CE. In the late 3rd century, Suric tribes settled the area and mixed with the Escadics to create a new tribe, the Dranii. Some remains of primitive fortified settlements from that time were found in the city, notably at Růžový vrch.

In the 6th century, Gaermanic peoples started settling at the shore of the Egalian Lake, causing significant tension in the area. In addition, Escadic people started separating from the Draniis and formed their own communes. Finally, the Dranii, united by Satto, set up their own small state around today's city of Krále Hora, some 50 kilometers north from Odrava. Odrava became a part of the Escadian Duchy of Abengardia and later the Duchy of Rabatta.

Around 880, a fort was built on the left (southern) bank of the river, laying the foundation to what is today the Odrava Fortress. In the early 11th century, the northern bank became a part of the Duchy of Drania. During this time, a town was founded at the site of today's Old Town. Serving as the crossroads of several important trade routes, the most notable being the Great Pretanic Trade Route, it soon grew in size. The area Later in the 11th century, the area became subject to the wars between Escadian duchies and the Egalian Empire, whose territory (at its 11th century peak) stretched all the way to the river Ostava, about 12 kilometers west of the town. In the Dranian-Egalian War (1104–1116), Drania conquered the entirety of today's Drabantian Egalia, including both banks of Ostava. During the High Medieval Period, Odrava prospered economically and was home to about 20,000 people.

In 1378, following the Egalian annexation of Drabantia, Odrava was looted and burnt down almost completely. In the early 14th century, a black death epidemic killed 15,000 people in the city, i.e. about 60 % of its residents, further worsening the situation. The city lost its former significance during the 15th and 16th century.

During the Wars of the Emperor's Crown (1600–1617), Odrava was the site of frequent clashes between the royal army of the Empire, the army of Escadia and the Drabantian people's militia, and burnt down again in 1616. After the war, it became a part of the Union of Drabantia and Litvania within the newly reformed Egalian Empire. The city saw growth during this era again, with new construction and also the restoration of the Saint Madeleine Cathedral.

Interior of the baroque Church of Saint Peter

In 1722, Odrava became the third largest city in the newly established Kingdom of Drabantia. During much the 18th century, Odrava was not only a trade hub, but also an important cultural center, hosting a number of cultural events and being the residence of many artists and mecenaries.

Odrava became an industrial city in the 19th century with a variety of factories across all branches of industry. The new harbor was completed in the 1840s and around that time, the railway from Odrava to Krále Hora was built. The population of the city increased more than times from 95,000 in 1845 to 356,000 in 1897, thanks to people migrating to the city from the countryside in search of a job.

In the first half of the 20th century, Odrava faced many social issues such as growing income inequality, a shortage of housing and a soaring crime rate, causing the residents to grow more and more unsatisfied. In 1938, the far-right National Union came into power in Drabantia. The city's residents were mostly working class and favored the left-wing Socialist Front. On Labor Day 1942, the citizens held a mass protest against the government but were met with a brutal police response, leaving four killed. In January 1944, about 15,000 went on the so-called hungry march from Odrava to Krále Hora to protest against the food shortage caused by the devastating drought of 1943. The demonstrations on Labor Day 1945 in Odrava eventually resulted in the overthrowing of the right-wing government and the installment of a socialist regime.

In 1979, the first segment of line A of the Odrava Metro opened. The population of Odrava continued to grow, reaching 800,000 in 1995. In the 1990s, the city went through a period of recession following the shutdown of several large industrial plants. Today, Odrava is a modern globalized city with a diversified economy.

The city in winter

Sunset on the river

Odrava is situated at 53°73"N and 88°61"E in the easternmost part of the Egalian Basin. The city lies at approximately the same latitude as St. Richards, Pretany; Nerschach, Kalm or Vasireii, Karolia.[4] River Borava flows through the city and empties into the Egalian Lake on the outskirts of it.

The city can be divided into two distinct geological parts. The northern bank of the river Borava is lined with a relatively steep slope that's occasionally cut through by a stream-formed valley. This is a remnant of a tectonic fault that happened in the tertiary. With the average elevation of 158 meters (518.37 feet), the area further north is a flat plain, only disrupted by the valleys. The part south off the river is mostly flat and sits at an average elevation of 125 meters (410 feet.)[5][6]

Odrava lies in a humid continental climate (Dfb).[7] Weather is greatly influenced by the city's proximity to the Egalian Lake and by the river Borava flowing through the city. The climate is milder and more humid than in most other parts of the country, the city is also relatively windy. Summers are warm with temperatures often reaching 30°C (86°F), also bringing the most daily sunshine. Heavy rain showers and thunderstorms occur frequently in the summer.[8] Most precipitation occurs late spring between April - June. Falls and winters are relatively dry with cold, foggy days. Snowfall is common from late November to early March, however snow cover over 30 cm (1 foot) is rare.

The municipality of Odrava has the special status of a capital city and doesn't belong to any of the 9 Drabantian regions. The city exerts all of the rights and responsibilities of the regions within its territory.

Odrava lies in the center of Drabantia's road network. Aside of many primary and secondary roads, the city is also connected to many motorways, including D1 to Krále Hora and Lipice, D3 to Banuj Region, I/4 to Escadia and I/10 to Drabantský Kolín, Janov and Litvania. Additionally, the eastern part of the city is surrounded by MO, the ring road.

The city is a hub of both passenger and cargo transport. High-speed railway (200 km/h) connects the city to the Banuj Region and Krále Hora. Odrava Central Station is the second largest train station in the country.

Many towns and cities in Drabantia can be comfortably reached from Odrava by train, thanks to the dense railway network and infrastructure spending. Express trains reach Krále Hora in 40 minutes, Lipice in 1:45 hours, Třesno in 2:25 hours and Vaberec in 4:45 hours.