Redbeard's Island came under the control of a pirate only known as "Davy Jones II" in 1772. It became AN mandate in 1920 (

) when civil order collapsed. It was handed over to the Aorangëan Federation in 1943

The name refers to the physical appearance of the former owner of the island and was almost exclusively used as an exonym, while it was called Sunset Island by the locals. Only during the AN administration the name became widely used locally and eventually became the official name. 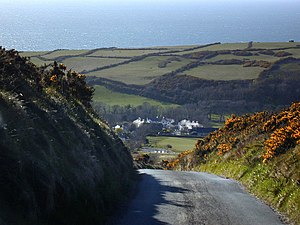 Road 155 from Emleyth to Seven Witches

Redbeard's Island is located in the Ardentian Ocean almost equidistant (50km) from Nao Rānga to the south east and Anglesbury to the north east. It is 20km long and 10 km wide, and has an area of 67.72 km² (26.15 sq mi).