map) is a narrow strait which connects the Gulf of Volta to the Darcodian Sea and separates the Mergan States Wabern in the south and Stefalen and Vocklenbrug in the north. The name comes from its southern position in the Mergan territory (e.g. relative to the Strait of Madrin). There are several islets, such as XXXX and XXXX. Due to its location solely on Mergan territory, the strait is not internationally administered.

The Suiderlink is a combined railway and motorway bridge-tunnel fixed link across the Southern Strait. It connects the southern and northern parts of Mergany, in detail, the states Wabern and Stefalen. The Suiderlink includes one of the longest combined road and rail bridge in Eastern Uletha. In the south close to Gausbrug the link starts with a xx km causeway. A xx km long artificial island connects the causeway with the bridge. The bridge is about xx kilometres long. The route opened on July 2, 1994 and shortens the travelling time extremely. The new road has three lanes in each direction. 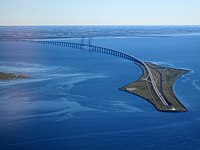