The Youcestershires are dominated by the Youcester Plains. These fertile lands attracted many settlers and especially in the southern shires of Upper Youcestershire, many still follow their traditional agricultural and pious lifestyle of the 19th century. Their self chosen distance to the modern society helped their local hybrid dialect evolve into a modern language.

The Shires are clearly named after the City of Youcester, which ws itself named after a now abandoned village of the same name in Ingerland. The name can traced back to pre-Ingerish times, but unfortunately its meaning has long been lost.

The Youcestershires are located on the eastern coast of Youcesterland. They lie about 500km off the south western Kartumian coast. 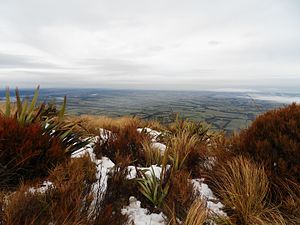 Farms and ranches cover nearly all of Upper Youcestershire. They stretch from suburban Youcester, along rolling plains, to the rugged Some Hill Range in the south. The chief crop, barley, is grown in nearly every county. The Youcestershires together harvest more than 75 percent of Aorangēa's crops.

Only few settlers came to Youcesterland in the first wave of 1648 and founded some settlements along the east coast. The major influx of Ulethans, mostly Ingerish, came around 1777, a time of religious unrest around the globe.

Many of those fleeing for religious reasons were attracted by the fertile Youcester Plains and finally gatheres in the southern shires of Upper Youcestershire, where until today they still follow their traditional agricultural and pious lifestyle of the 19th century. Their self chosen distance to the modern society helped their local hybrid dialect evolve into a modern language which has become the dominant language in southern Upper Youcestershire.

The Colony of Youcestershire was founded in 1815 and became a viceroyalty a few years later. The discovery of natural resources stabilized the economy for over a decade, before the distance to Ingerland became a major economic issue.

A decline in Ingerish interest and rising unrest from the remaining native population slowly increased the call for independence. As a desperate attempt of the Ingerish government the Viceroy of Youcester was granted hereditiary Dukedom to encourage his local involvement, but the success could not counter the independence movement, which finally resulted in decolonisation in 1836. Some royalists moved to East Anglesbury which decided to remain under Ingerish control.

Religious issues lead to a split of the colony into Nether and Upper Youcestershire before they jointly became two of the founding members of the Aorangēan Federation. The duke however was allowed to remain head of state of the two newly formed nations and also was granted his own small territory as compensation for his loss of political power.

The Duke or Duchess of Youcester is Head of State for both Nations, but has no political powers anymore. The two nations share a second parliamentary chamber, the House of the Counts of Youcester, which is also responsible for the Duke's Territory.

In both the Youcestershires, the Conservative Party (CPA) is not active. Its part of the political spectrum is instead covered by the Youcester Peoples Party (YPP), which often achieves a clear majority at elections. Also relatively successfull is the religious party GOP).

The Duchess' Territory ( or Duke's Territory) is the personal property of the Duchess (or Duke) of Youcester. The official name changes depending on the monarch's gender. There are only a few residents in the territory apart from the royal family. The settlements apparently located inside the territory are in fact part of either Nether or Upper Youcestershire or Nao Rānga. The residents only have voting rights in elections organized by the Federation of which none are currently held, as the General Election is organized by the nations, the President is elected through an electoral college and referendums have been outlawed since the 1953 referendum.

Amelia I, Duchess of Youcester

Amelia I (Amelia Beatrice Charlotte Doe, born 29 Februar 1996) is the Duchess of Youcester and hence Head of State of

Upper Youcestershire. She was born in Fawltryncham and became Duchess in 2011 after her uncle, the previous Duke of Youcester abdicated and her father being ineligable since years ago.