Get to the Point

The 1950s and 1960s were something of a golden era for Saviso. The city was wealthier than ever before, new infrastructure projects like the motorway system were underway, and people were arriving in record numbers. The city had gained its millionth citizen somewhere around 1945, and in 1967 surpassed two million people. But all those people have to go somewhere, and as Saviso strained to absorb the rush, the city began expanding to the west and south. Land that had for centuries had farms, sugar plantations, and orchards suddenly found itself being sculpted by bulldozers, paved with streets, and covered in houses. Traditionally, these were quarter-acre sections with bungalows or two-storey houses, although developers sometimes made sections a little smaller to put more houses in (and make some extra bank in the process). Today we shall look at one of these suburbs, Point Eceinin, on the tranquil Cobalt Harbour. 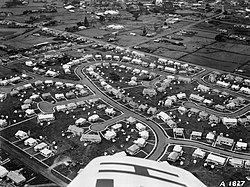 Savisan suburbia, 1947. This style of development, with individual houses on quarter-acre sections, was very popular through to the 1980s, when developers moved to putting more houses on smaller sections.

Point Eceinin ("ah-SEE-in-in", for those of you wondering) is one of many mid-century suburbs. Prior to its development from 1952 onward, it was mainly market gardens, with Point Eceinin Road little more than a gravel road with a small yacht club at the end. Before long though, the road was sealed, power poles were erected alongside, and the builders were hard at work. Suburbia had arrived!

The Point, as it is affectionately known, was one of a number of state house suburbs, where some areas were reserved by the provincial government to build low-cost housing upon. The homes were basic, but considered smart for the time, and for around £1 to £1 10/- a week (very reasonable considering that the average wage in the 1950s was around £5-6 per week), many families were able to call a state house home. This was all well and good in the '50s and '60s, but by the late '70s state housing areas had acquired a reputation for being slums and breeding grounds for crime and welfare fraud. Sadly, the Point lived up to the stereotype in almost every way, and it was common knowledge that Market Gardens Road was the separation line between the "nice" suburbs of Adie Park, Cavendish Park, and Seaford Bay, and the "bad" Point Eceinin; this is despite the fact that state housing areas were concentrated around the western side of the peninsula (Auteuil Road and Raphurst Avenue) and not the eastern (Tohroa Avenue and Glenhaven Drive).

Since the 1980s, though, the situation has improved. The Federal government of the time opted to sell its entire housing stock in Point Eceinin, with the effect that many of the houses, some of which were practically unsafe to live in due to neglect, were demolished and replaced with nicer homes. Today's Point Eceinin isn't on the same level as the likes of Pontefract or Wingate Head, but it's not a bad place to live in all the same.

Point Eceinin is based very heavily on the suburbs of Te Atatu South and Te Atatu Peninsula (formerly North) in Auckland. Originally I was going to emulate some of the suburbs of East Auckland (such as Farm Cove, Half Moon Bay, and Pakuranga), but after picturing the peninsula in my mind, I realised that Te Atatu was a much more suitable base. It, like the Point, was developed in the 1950s and 1960s thanks to the Northwestern Motorway, and has a mixture of "nice" houses, and ones where it's a little rougher. Having done some campaign work around Te Atatu (and will no doubt be doing more in the run-up to this year's election), I found myself not mapping from the air, but from the ground - picturing what Point Eceinin would look like were I there knocking on doors in the area. Mapping at ground-level can be quite useful, because if you picture it in your mind, you can get an idea for how your maps work for the people who live in them.

It also turns out the people of Point Eceinin Road vote Liberal on one side and Federal on the other. That will make my door-knocking easier come the 2018 and 2019 elections.

Please affix your signature and timestamp. Park on the broken yellow lines at your peril.