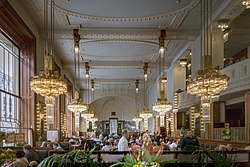 The Art Nouveau interior of the Jenšovský Palace in New Town, Odrava

Verona Coffee shop in the Koruna Mall in Krále Hora

The history of Verona Coffee traces back to the late 19th century, when the demand for exotic food and drinks grew in Drabantia following the development of railways in Central Uletha, meaning such goods were easier to import. František Jenšovský, a textile industry tycoon, opened the first coffee shop in Odrava in September 1874. The shop also functioned as a showcase of the fabrics made in Jenšovský's textile factories and soon became frequented by Odrava's rich. The coffee house became known nation-wide. Jenšovský then opened several more locations across the country, by 1921 there were 17. Apart from selling coffee, the coffee houses also specialized in Ingerish tea.

František Jenšovský died in 1923 at the age of 89 and his oldest son Maxim inherited the coffee company. He changed the business strategy to better suit the growing middle class. Small Café Jenšovský kiosks could soon be found in department stores, its name brand ground coffee was sold in grocery shops. Following the economy crash in 1942, Jenšovský decided to close down 15 of the 24 existing home locations and looked to expand internationally instead. In 1947, the first location opened in XY under the name Café Verona, a name chosen by Maxim Jenšovský's son Oldřich that was later revealed to be the nickname he had given to a girl he was in platonic love with, Veronica.[2] In the same year, the Jenšovský family lost most of their textile factories due to the ongoing nationalization of industry in Drabantia.

In the 1960s, all of the existing locations were renamed to Café Verona with the exception of the Jenšovský Palace in Odrava. The brand was popular in Drabantia and opened multiple new locations abroad each year, reaching 1,000 locations in 1997.[3] Café Verona had a business deal with the supermarket brand Gigante.[4] Gigante sold Verona-branded coffee for lower prices and Verona locations were often found in Gigante hypermarkets. Gigante Corporation eventually bought Verona in 2001 for DBK 2.78 billion (1.39 billion USD.)[5][6] The name was then changed to Verona Coffee.[7]

The company tries to present itself as environmentally conscious.[10] In an effort to decrease its waste production, Verona Coffee introduced a 10% discount for customers who bring in their own reusable cup, and a 1 Kr (0.5 USD) deposit for paper take-away cups. The paper cups are partly made of recycled paper. Selected stores are now (2018) testing cups made of biodegradable plastic. Verona Coffee also gives out leftover coffee beans for composting. The company also adopted a new social responsibility policy in 2011 after being criticized for underpaying coffee farmers. About 19% of the coffee Verona buys is certified fair trade.[11]