Yorakēa is a municipality in Nao Rānga, Aorangēa on the northern tip of Kiranēna Island. It has a permanent population of approximately 50 000.

Over three million people visit Yorakēa annually, primarily for alpine skiing and snowboarding and, in summer, hiking at Lake Taukerahu. Its pedestrian village has won numerous design awards and Yorakēa has been voted among the top destinations in South West Kartumia by major ski magazines since the mid-1980s. In 2010, Yorakēa hosted the Winter Games.

Yorakēa is located at the isthmus between Shearburn Sound and Lake Barrawina. Despite its name Lake Barrawina is connected to the sea and has higher tides than the Shearburn Sound. While most of the water flows through a maelstrom at Morrow Bay, some water is used to fuel a tidal power plant.

Grimguay Island - a peninsula despite its name - is located north of the isthmus, while Kiranēna Island proper lies in the south.

The 2010 Winter Games, commonly known as Yorakēa 2010, was an international winter multi-sport event that was held from 14 to 29 August 2010 in Yorakēa, Nao Rānga, Aorangēa. This marked the first time that Aorangēa had hosted the Winter Olympic Games, after applying unsuccesfully thrice in 1990, 1994 and 2002. As a Southern Hemisphere event relying on snow it was moved from its traditional February time frame to August, right after the 2010 Kartumian Football Championship in June.

Despite Yorakēa being located at sea level, a rarity for the Winter Games, weather conditions did not pose an issue, due to the high latitude and the higher altitude if the venues themselves.

The opening and closing ceremonies, the biathlon and cross-country skiing events were held at the Yorakēarena (map) at the western side of the geolympic village.

The ski jumping hill, playing host to the jumping events and nordic combination is located across the train station right next to the arena.

The sleigh events were held at the sleigh track at the eastern side (map) of the geolympic village.

The alpine skiing events were held at various hills, notably the downhill event which ran down from All Gallows' Peak to the Yorakēarena. 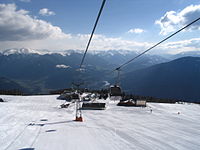 The remaining ice hockey matches and short track speed skating were held in the ice hockey stadium (map) in Yorakēa.

In each event 12 teams participated and were drawn into two groups of six. The top three teams qualified for the final round of six with the results carried over. There was no dedicated final match.

In each event 12 teams participated and were drawn into three groups of four. The two best group winners proceeded to the semifinals, while the third group winner and the runner up teams played the quarterfinals.

The Sea'n'Ice Railway from Yorakēa to St. Amelia at Lake Taukerahu and further to the Southern Icefields Glacier in the Southern Territories was renovated and new rolling stock was ordered. Also a small number of vehicles were ordered without rack equipment for use on the lower part of the line to provide a tram-like suburban service. A city loop was constructed in Yorakēa for better access to the city centre and to relieve the terminus at the main line station. The city loop also shares track with the re-routed cable car line to Carthoona. The city loop was routed via the school to be able to use the railway for school transport at times when commuter traffic peaks but tourist traffic has spare capacity.