The Aulean Confederation is a sovereign state on the continent of Antarephia. It includes the cities and towns of Carran, Johnnyville and various others.

The government of Auleus has three levels

Leader of the Confederation

The Senate is reelected every five years

The Assembly is reelected every five years

The Chancellor resides in the assembly

In Auleus there are various political parties

After the collapse of the mythical Gaderyt Empire around 3500BC, Eus tribes moved into northern Auleus, by 1000AD small trading city-states had been established on the coast, these were merged under Ingerish control to form the Colony of Aul.

In 1753 was the founding of the Colony of Aul with an Ingerish governor in charge. Aul is a penal colony. Native Eus people sent to neighboring lands.

An independent empire was formed by the last duke which then started expanding eventually annexing all of modern Auleus excluding Sudestia. The Kallipolis Crisis and discontent among citizens saw the empire launch a botched attack of Sudestia which led to Civil War against the Eastern Coalition consisting of the Republic of Auleus, Auleus Socialist and the Margraviate of Sudestia. After initial success with the invasion of Sudestia, a rebellion arose in the north outstretching resources. Because of this the Sudestian had a successful offensive, winning the decisive Battle of the Kialup. With a northern front being organised by Auleus Socialist, the Imperial forces began a very slow retreat gradually losing territory, including the Vicounty of Johnnyville-Williamston at the Battle of Kattarn. Carran finally fell in 1933 after 23 years of war, after this the country was devastated and would take time to rebuild.

After the Civil War Auleus was split in three into the Democratic Peoples Republic of Auleus (North Auleus), Second Republic of Auleus (South Auleus) and the Margraviate of Sudestia. This situation lasted for about 5 years until South Auleus collapsed, the nation collapsed because of the right-wing policies that were instigated by the government were not suitable for the nation so soon after the war, this led to discontent among the population, after a failed coup d'état the government collapse and the army dispersed in to regional militias, meanwhile North Auleus and Sudestia sent in troops to create stability, however the local militias tried to prevent the attempted occupation. This resulted in the signing of the Treaty of Ferron, in the Treaty, Auleus was united and sub-national units voted on which political system they desired, these ststes were organised into a confederation. The de facto factions of the ruling Socialist Party of North Auleus were split into de jure parties, creating a democratic multi-party system. A head of state was elected from the heads of each of the states and named the Leader of the Confederation. After the end of the restoration period a there was a lot of prosperity with entrepreneurs like Quentin Wilsonovich (founder of Wilsonovich's) creating many profitable companies that continue to this day. However for most of this period the naion was de facto a dictatorship ruled by Thomas Hillser, he oppressed some parts of society to keep power, he did this with tools like the State Security Directorate, (SSD) a secret police, the SSD spent a lot of time clashing with the opposition secret police the New Imperial Guard a remnant of the Imperial Militia Force, public street battles between opposing party members and organisations were common in the Hillser period.

Flag of the Third Republic of Auleus

The Aulean Mafia began their rise to power after the Aulean Civil War. The Mafia gained significant power and wealth after protectionist laws were past in Auleus and the Mafia created a black market of illegally imported goods, this grew to a peak in the 1980s when, the Mafia were one of the most powerful organisations in the country and wielded significant political power as it had integral links with the ruling Socialist Party of Auleus. However when the Conservative Party of Auleus won the 1995 election with a election promise to dismantle the Mafia. This however caused problems as the Mafia assasinated a succesion of conservative chancellors, leading to the December Crisis during December and January, Auleus was in political crisis with the Third Republic of Auleus was declared in Carsile and martial law being declared nationwide, and a military government called the Carran Council being installed in Carran, being supported by other nations. Under the leadership of General Himnak Dutto-Snyder order and democracy was restored to Auleus within 2 months with monarchs that had fled returning soon after. Most of the Mafia were captured after this as Dutto-Snyder's army had advanced faster than anticipated, those captured were given two options, either serve life imprisionment for treason or join a rehabillitation program to transition back to normal life, most chose the latter. Although after two years most of the Mafia was back together and formed a online shopping websiter that sells somewhat illegally imported goods, however it is in a grey area of the law and thus is allowed to continue operating. After the crisis an election was held in late 1996 after the country had been governed by the Aulean Provisional Government consisting of the military, monarchs and some major party representatives for most of the year.

The physical geography of Auleus consists of a coastal plain leading to some small hills about 40 km from the coast then there is a plateau slowing increasing in height to Tri-point Mountain. 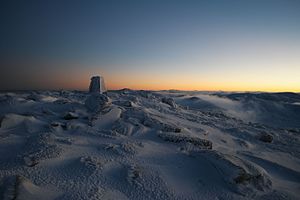 Sunrise views from the summit of Tri-point Mountain

Sardines are a major industry in Auleus. It is a tradition that the national sardine fisheries names their flagship sardine brand after the current Grand Duke with the prefix King instead of Grand Duke so the sardines sell better in Ingerland, which is a big consumer that doesn't like Auleus

Royal Auleus Car Co. is a multinational car company based in Carran, although now most of the company is now based at the United Commonian Car Co. in Williamston, Craters, Commonia.

A notable Department store is Wilsonovich's

The national carrier is RAA

Auleus is made up of ? provinces

Since the 1930's sport has been very popular in Auleus.

Auleus has the following magazines

U Turn: a motoring magazine