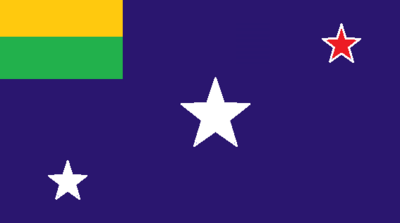 Its capital is Campo Verde-RV. Its main port and larger city is Baía Azul.

The brasonian federation is composed by 4 states. Its official language is Florescentian.

Brasonia is a federal constitutional republic. Its current head of state is the president Lordinho Moreira (TBD)

Following 1985/002, by congressman Walter Moreira (AL), the National Anthem is mandatory before any daily classes periods in public schools.

Following 2000/004, by congressman Jairo Zessete (AL), the minimum age to be judged and punished as an adult in Brasonia is 16 years old, to both genres.

Following 2000/015, by congressman Basílio DeTetra (AI), is crime to vandalize any banknote.

Following 2001/334, by congressman Benedito Goiabeira (UP), is prohibited the use of any kind of camera in nudism areas.

Following 2002/245, by congressman Armando de Fátima (AI), any house or land owner can legally shoot in invaders, using a registered gun. Anyway, is expensive to keep legally a gun in Brasonia.

Following 2012/154, by congressman Benedito Moldan (UP), is no longer mandatory tthe use of front license plates in brasonian particular cars, but is needed to use an small id-tag in the windshield if doing it. Anyway, still is mandatory to commercial and public vehicles.

Following 2021/017, by congressman Ed Pereira (PH), is mandatory to use face mask when in an hospital or other health care facilities, be it private or state owned.

Brasonia is divided in estados/ states. There are 4 states in Brasonia.

Each state is subdivided in comarcas/ counties(??), but these are just judiciary boundaries. There are 17 counties in Brasonia.

The correct translation to "county" is "condado", but in this article lets use it as "comarca".

Still, municipalities with larger territories, or so much populous, can be subdivided in distritos/ districts.

Any district with at least x sq km (ir rural areas) or 50.000 inhabitants (in metropolitan areas) can try to get emancipation via public voting with voters from the municipalities involved.

Currently, only Baía Azul-OL, Barra da Grama-MR and Campo Verde-RV keeps districts under their municipal boundaries, but some rural towns with larger territories are talking to their state government to create some districts too.

Baía Azul is the most populous city in Brasonia. Considered as "the militar capital" of the country. (TBD)

Barra da Grama is a rich city, considered the most well developed place of all the country. Despite not so big, the city got its own subway system. (TBD)

The city grown up on a large wetland area, and it is visible till present days in their several water bodies and irregular canal grids along the urban area.

Despite been located in a seaside area, there are few touristic beaches in all the metropolitan area, because the brave sea around.

Buses are the main transportation in the city and the metropolitan towns around. There are two subway routes, and BRT routes to all the seats of urban districts.

The Polícia Nacional (National Police), keeping also offices in the state capital cities, works only in things about national sovereign and security.

About public security, each state keeps their own police forces, under the national laws.

Also, is remarkable to mention around 35% of brasonian people can speak ingerish in an high level of fluency.

Still, there are several public universities in Brasonia, as in the following list: 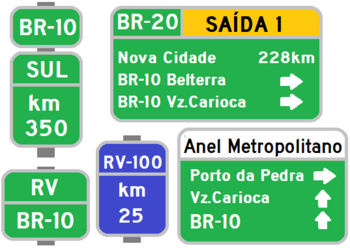 Some national and state highways in Brasonia are part of an international route system to Novakia and Luslandia.

Since 2010, there are no more toll roads in Brasonia territory.

Buses are the main transportation in Brasonia, both to urban, short or long distances.

Almost all bus companies in Brasonia are private. Only the BRT service in Baía Azul-OL and Campo Verde-RV are state owned.

All bus companies need to be registered in (TBD) to operate in Brasonia, even the foreigner companies.

The railways in Brasonia are most usual to cargo than passengers. All operations runs by CNEF (Companhia Nacional de Estadas de Ferro), a public company.

Anyway, CNEF and some private multinational companies are investing in a high velocity train running between Brasonia, Luslandia, Novakia and Latina.

Some cities around Brasonia also uses trams as part of urban transportation. 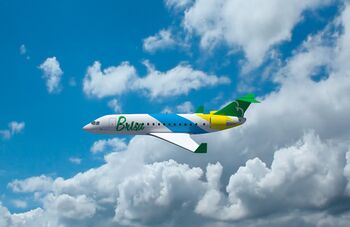 Meaning "breeze" in florescentian, Brisa originally was from Barra da Grama-MR ("the breezy city"), but currently keeps its headquarter in Campo Verde-RV downtown, and its major hub is in the Aeroporto Internacional de Campo Verde-RV, despite keeping also hubs in Novakia and Luslandia.

Currently, the company keeps a fleet of (x) planes, all of them manufactured by paxtarian company Watanabe Aerospace, operating 19 routes in and from Brasonia to 6 countries.

Needs to be mentioned that Brisa is considered one of the "gran luslandese companies", been national carrier both to Brasonia, Novakia and Luslandia.

Brisa is head of an small airlines group that includes BelSat, from

In Brasonia, people is also free to watch and listen to some Novakian and luslandeses TV channels and radios.

No doubt, footbal (soccer) is the most popular sport in Brasonia.

Currently, there are 5 autodromes in Brasonia to the current seasons of motorsports, that also includes raceways in Luslandia and Novakia.