Mapping aviation facilities and considering how countries connect to each other can be an enjoyable part of mapping on OGF. Once you have begun to build an international airport, the question arises: "what are some destinations from here?" Here are some things to consider when deciding where to fly.

Figuring out where to fly

Step 1: How well mapped is your city?

Before even thinking about air travel destinations around the world, first ask yourself: how much has your city been mapped?

If your city is developed enough to set up some flights, create a range map to find likely destinations. Remember that many OGF locations are further apart than might be thought on first glance. Paxtar has put together an amazing tool here that can draw circles to show the range of various types of aircraft. To create this map:

——— The red circle (3000 km radius) represents the approximate limit for short haul flights. Small airports may be limited to short haul flights only; and even at larger airports, most destinations will typically be within this range. From the busiest airport in the real world, Atlanta's Hartsfield-Jackson International, about 80% of destinations are short haul.

——— The orange circle (6000 km radius) represents the range for medium haul flights. From Atlanta, about 10% of destinations are medium-haul. These flights are usually between large cities or other important destinations.

——— The yellow circle (12000 km radius) represents the range for long haul flights. From Atlanta, about 10% of destinations are long-haul. These flights are usually between large cities, and require long runways as well.

——— The gray circle (15000 km radius) represents the limits of ultra long haul. These flights are rare and typically run only between major world hubs. From Atlanta, fewer than 1% of destinations are in this category. Most airports have no ultra long haul flights.

Step 3: Find destinations within the ranges on your map

Next, compare the range map you've created with the list of airports. Remember that: 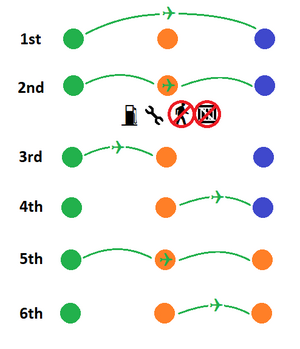 Basic graphical depiction of the six OGF world air freedoms, all from the perspective of the orange nation with all flights shown hosted by a carrier based in the green nation.

The world air freedoms are a set of commercial aviation rights granting a country's airlines the levels of privileges to enter, operate, and land in another country's airspace. The use of the terms "freedom" and "right" confer entitlement to operate international air services only within the scope of the multilateral and bilateral treaties that allow them.

The first two freedoms concern the passage of commercial aircraft through foreign airspace and airports, the other freedoms are about carrying people, mail, and cargo internationally. The first through fifth freedoms are officially enumerated by various international treaties. Additional freedoms have been added as part of bilateral or multilateral arrangements through individual countries; these are not broadly applicable or recognized. The lower-numbered freedoms are relatively universal while the higher-numbered ones are rarer and more controversial.

The World Air Freedoms apply only to commercial aviation and are not relevant to military aviation of any kind. The terms 'freedom' and 'right' are a shorthand way of referring to the type of international services permitted between two or more countries. Even when such services are allowed by countries, airlines may still face restrictions to accessing them by the terms of treaties or for other reasons.