Riopoderos, officially the State of Riopoderos, is a state in the central West of the Federal States of Archanta. Riopoderos is bordered by Sierra to the north, Apawiland to the northeast, Osaquoya to the east, Tennewa to the south, Aquilia to the southwest, and Clamash to the west. Riopoderos is named after the abundance of rivers, streams, and rainfall. The name is comprised of the Castellanese word "rio," which means river, and the Poa'ku'iwo word poderaa, which means "fertile lands."

Before Ingerish settlement, Native Archantan tribes, such as the Apawi, Kaitenas, and Poa'ku'iwo tribes traversed the lands. These tribes used the fertile lands to grow an abundance of crops. The men of these tribes were responsible for hunting for animals, and providing animal hides to be sewn into clothes and covers for their home structures. The current generations who have origins in these tribes may be found heavily within their respective Native Reserves, the most famous being the Poa'ku'iwo Nation Reserve. 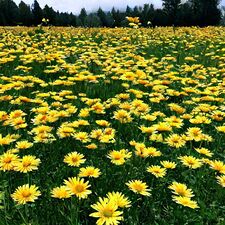 A Field of Mountain Sun Daisies, the state flower. 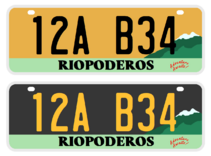 Before foreign settlement, native peoples roamed the area. These peoples, like some others, were semi-nomadic, following herds of migrating bison, hunting them for their meat and hides. The six major tribes that inhabited Riopoderos were: Planos, Kaitenas, Apawi, Poa’ku’iwo, Wa’pako*, and Ravvalipo**. The Planos tribes inhabited the prairies and mountains of modern day Planos County. The Planos were very particular in their strategic abilities. Archaeologists have noted the special craftsmanship of weapons, maps, and clothing that were similarly colored to the grasses, which was used for camouflage.

* Is not continued into neighboring states; ** Undecided or Unofficial