Minnonigan (min-ON-uh-gin) is a state in the West Lakes region of the Federal States. The state's name derives from a Native Archantan word meaning "pleasant portage". Minnonigan's largest city, Lake City, was the westernmost accessible deepwater port on the Grand Lakes prior to the construction of the Ondassagam Waterway system and remains one of the largest cities on the Grand Lakes.

Minnonigan is situated between Lake Sauganash and Lake Amanecer in the West Lakes region of the Federal States. The state is bordered by the states of Wahauja and Aquilia to the north; the state of Seneppi to the east; the state of Nishowigan to the south; and the country of Deodeca to the west. However, due to Lake Amanecer, Minnonigan's only land boundary with Deodeca is a short segment in the far south, near Barre Harbor and Nishaukee Falls.

Northern Minnonigan is defined by its rolling, hilly terrain, full of mineral resources such as coal. The point where the states of Minnonigan, Wahauja, and Aquilia meet is the southernmost noteworthy peak in the western mountain range. From these hills, the Stone and Thomas Rivers flow southerly through low rolling hills until the land flattens out into rich, arable prairies. The Thomas River flows into the Stone River just north of the Lake County line, flowing through Lake City on its way to Lake Sauganash. In western Minnonigan, a small midcontinental ridge separates the Thomas River from the Canton River, which flows into Lake Amanecer. The Thomas and Canton Canal, the first crucial link in the Ondassagam Waterway network, was constructed in 1838 to allow large ships to transit between Lake Sauganash and Lake Amanecer via the Canton and Thomas Rivers, bypassing inland waterways in Deodeca and Lake Betaouais. The Ondassagam Waterway network also includes an additional canal constructed to link the Stone River with the Gray River for more direct access to the Akogama River system.

Minnonigan and Seneppi -- or more specifically, the cities of Lake City and Wallawaukee -- have been friendly (and occasionally, not-so-friendly) rivals since the opening of the inland waterway network, as regional freight can more easily bypass Wallawaukee in favor of Lake City.

Under the Köppen climate classification, most of Minnonigan is considered to have a hot-summer humid continental climate (Köppen Dfa), with a variety of weather throughout all four seasons. Lake Sauganash and Lake Amanecer provide some moderating influences for areas along the immediate shorelines.

The largest metropolitan area in the state is the Lake City region, which encompasses all of Lake County and parts of numerous additional counties, including some development in neighboring Nishowigan and Seneppi. Other major metropolitan areas include Barre Harbor along the boundary of Deodeca, the Ondassagam area, and the Thomasford area, which serves as the state's capital.

The government of the State of Minnonigan is based in Thomasford, with some satellite executive offices in Lake City. The Bicameral, the Minnonigan state legislature, is composed of the House of Representatives and the State Senate. Representatives are elected every two years; Senators serve a term of six years, with rotating elections such that one-third of the Senate is up for election every two years. Each Senate District is composed of three House Districts, which are redrawn every ten years. Currently there are 99 Representatives and 33 Senators in the Bicameral.

The Governor of Minnonigan leads the executive branch of state government. Governors serve four-year terms and are term-limited to serve no more than eight years.

The State of Minnonigan uses a "jungle primary" system, where all candidates from all parties run on the same ballot for state offices. A candidate can immediately win their election if they win a majority (50%+1) of votes in the jungle primary; if no candidate wins a majority, a general election is held with the top four vote-getters advancing to the general election. Voters then use ranked-choice voting to elect a candidate.

Minnonigan is divided into 32 counties.

* - Two townships in Lake County that are entirely within the City of Lake City and/or the City of Daviston no longer exist as legal entities.

Municipalities in Minnonigan are classified as either villages, towns, or cities. This classification is based on municipal government structure rather than population. 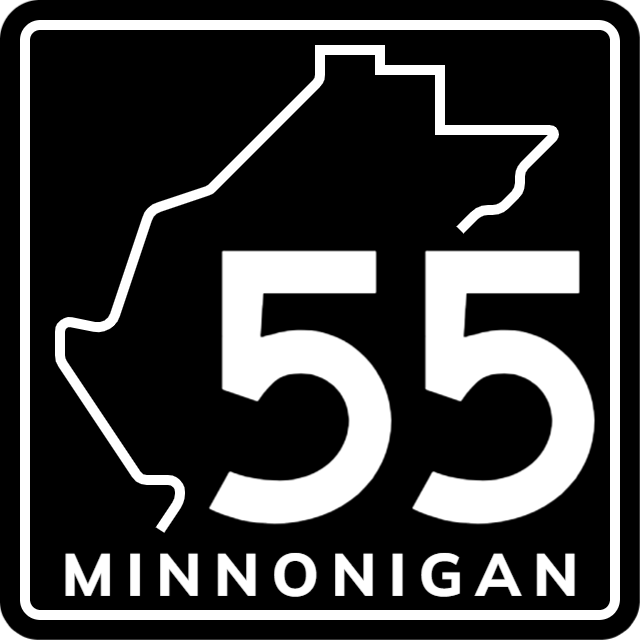 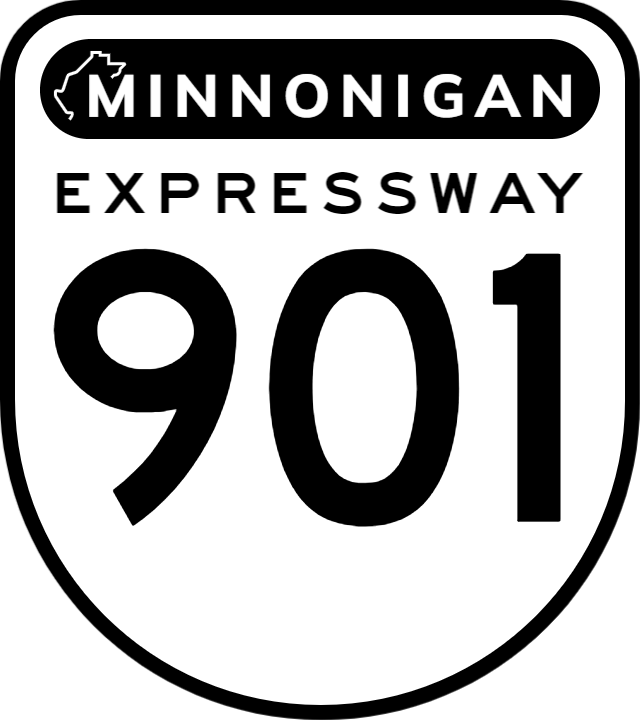 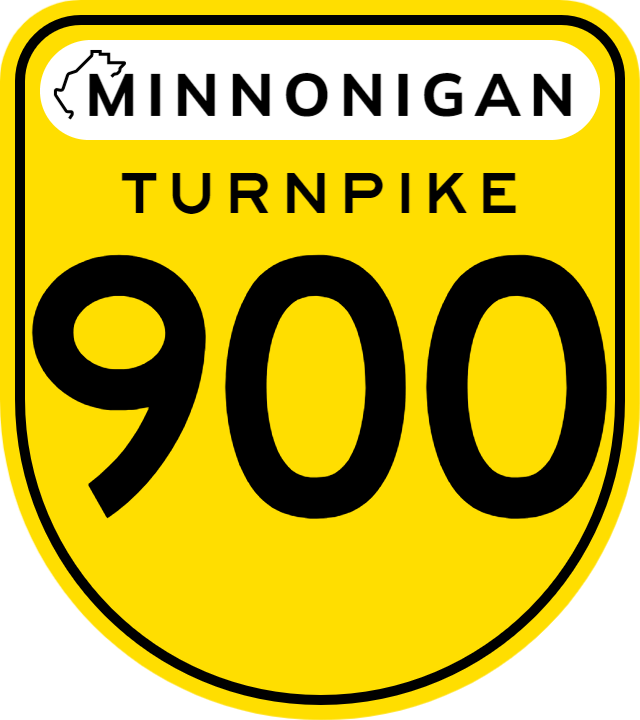 Beginning in 1947, Lake County and the City of Lake City began building a network of superhighways intended to alleviate traffic in and around Lake City. These superhighways were later added to the Minnonigan state highway network with 900-series route numbers, since there is no SR 9 in Minnonigan. These highways were also identified using unique shields to help identify them as high-speed, limited-access facilities. Many of the 900-series expressways and tollways became part of the Federal States Defense and Commerce Motorway Network.

To create a statewide network of these superhighways, the Minnonigan state legislature created the Minnonigan Toll Highway Authority (MTHA, also known colloquially as the Minnonigan Turnpike), charged with building tolled turnpikes throughout the state outside of Lake County to be funded and financed by tolls. Many of these turnpikes became part of the Federal States Defense and Commerce Motorway Network. While Minnonigan's turnpikes are similar to Lake County's freeways, they generally have fewer entrances and exits to more efficiently channelize traffic to toll booths. Unique toll highway shields are used on turnpikes to more quickly identify them as tolled facilities. In 1996, the MTHA created the ePass electronic toll responder program, which allows motorists to pay tolls using an electric transponder which is linked to a bank account or credit card. In 2001, the Queen's Landing Turnpike (new FS-24) became Minnonigan's first turnpike with full-speed mainline ePass lanes, allowing drivers to pay tolls while traveling at highway speeds. Since then, high-speed tolling has been expanded to all mainline toll plazas. ePass is accepted at all MTHA toll plazas as well as on the Hutchinson and Stone Heights toll bridges over the Stone River.

Minnonigan established itself as a railway hub of the Federal States in the mid-19th Century, as one of the FSA's first transcontinental railroads (now known as the Sauganash and Northern Railroad) was planned through the state; the state's modest topography and location south of the western mountain range allowed for construction of a transcontinental route through what is now Wahauja and Clamash to Asperic ports in Tauhon. The Minnonigan Central Railroad, which links Lake City to ports in Alormen, is also a major freight carrier in the state.

Minnonigan has several major inland ports, notably on Lake Sauganash at Lake City and on Lake Amanecer at Port Bucks near Ondassagam. Larger lake-going ships are able to transload cargo to rail and truck transportation, or to smaller barges to navigate the state's inland waterway network.

Lake City International Airport (LCX) is located west of Lake City, just east of the Lake/Jarvis County line. The airport, with seven runways and 196 gates, is by far the largest airport in Minnonigan and one of the busiest in the southwestern Federal States. The airport serves as the primary airport for Lake City as well as for northern portions of Nishowigan. LCX opened in 1963 to replace Gunnison Airport, which in recent years has re-emerged as a major commercial airport in Minnonigan. Additional commercial airports are found near Barre Harbor, Ondassagam, Thomasford, and Carbonridge.

All non-domestic calls to Minnonigan begin with the (55) state code, or +611-55 from outside the Federal States. Phone numbers in Minnonigan are in the format AA-BB-CCCC, where:

Template:Political divisions of the Federal States