This page details how railway companies are structured in the Federal States. For technical details about mapping and tagging FSA railways, visit Collab:Federal States/Railways/Resources.

The Federal States railway network is based on a variety of private companies providing short-, mid-, and long-haul freight services throughout the country. The FSA also has a national passenger rail network that generally operates at relatively low speeds and low frequencies over freight trackage; however, in many regions private passenger carriers also exist to provide more frequent passenger services (at higher speeds, in some cases) between population centers where passenger rail service is competitive with commercial aviation.

This page serves as a primary listing of the various private freight and passenger rail companies throughout the nation, and outlines the steps mapmakers need to take to establish a new rail company or expand an existing rail company.

Freight companies are formed in one of three ways:

Each stateowner, regardless of number of states owned or participated in, may only serve as one railway's chairperson and as one railway's co-chairperson. In other words, no stateowner can participate in organizing more than two national railway companies. (Class C and D railway companies are smaller and do not have chairs, so they do not count against this cap.) Passenger railways are organized similar to freight railroads, but are restricted to Class C and Class D systems to avoid competing with the national passenger rail company. Individual stateowners should not organize interstate passenger rail service (except commuter rail systems that serve nearby states in a metropolitan area); regional collaboration groups should take the lead on these efforts.

Stateowners should feel free to add to this list, provided these companies meet the criteria outlined on this page. Zones and Class definitions can be found in the following sections of this page. For each entry, please be sure to include the current "Status" of each railway company using the following options: 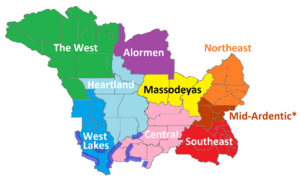 This map divides the FSA into eight regional context cluster zones. These zones, which were created based on existing development patterns, existing regional collaboration groups, and significant geographic constraints (rivers, mountains, etc.) form the basis of this plan.

Each zone is tasked with determining their own internal railway coordination structure. This can take the form of a regional organization group like the West Lakes Compact, an elected chairperson(s) delegated by zone stateowners to oversee coordination efforts, or some other format decided by each region. These groups will oversee development of RPRCs and Class C freight railways (see below).

Collaborative states that are master-planned are generally not included in zone committees; mappers interested in adding railway corridors and railway companies should work with each collaborative state's coordinator(s) instead. Each zone is also responsible for developing a unified tagging structure for railways mapped in their zone; these tags must include name=*, operator=*, and service=* at a minimum for mainlines. The name=* tag should include both the operator's abbreviation and the name for that particular stretch of railway (e.g., "MCRR Ondassagam Subdivision").

Each railway in the Federal States should be tagged with an operating company (operator=*), who owns the railway and is the primary company operating on that stretch of railway. Other companies can have "trackage rights" with permission from the operating company; in these locations, a company's route relation is permitted to include the railway of a different operator. A railway company primarily oversees a single point-to-point mainline, although spur lines that connect the mainline to secondary destinations are also encouraged.

Collaborative states or other stateowners that prefer to have consolidated rail corridors can also choose to form their own Class D "union" railways that are shared by multiple railroad companies.

Each stateowner, regardless of the number of states a mapper participates in, is permitted to be chairperson of one (1) company and co-chairperson of one (1) additional company. (Coordinators of Guided Collaborative states that do not own an FSA state are also considered "stateowners".) Chairpersons are responsible for planning and organizing interstate routes with the permission of each state along the corridor. There are five classes of railway companies, as described below.

Class D railways are the smallest railway companies in the FSA, generally restricted to a single state or under 300 miles/500 kilometers of mainline track, whichever is less restrictive. Class D railways include industrial short lines, union railroads, and terminal railroads. Class D railways are expected to be organized by an individual stateowner (with permission of adjacent states, as needed) for the primary use of their state's residents or businesses and do not count against any caps. Class D route relations should operate with less than 50% of route mileage on trackage rights.

Class B railways serve two (2) zones and are organized by a single chairperson, who must be a stateowner on the company's mainline. The chairperson is responsible for negotiating routes with the permission of each stateowner along the route. Class B railways are expected to consist of a single primary point-to-point mainline, with a few additional smaller spur lines. Class B route relations should operate with less than 30% of route mileage on trackage rights.

Class A railways serve three (3) zones and are organized by a chairperson and a co-chairperson; the chair and the co-chair's states must both be located on the mainline and must be in different zones. Similar to Class B railways, the two chairpersons are responsible for planning routes and getting permission from each stateowner in planned corridors. Class A railways are also expected to consist of a single primary point-to-point mainline, but with additional spur lines that serve additional significant destinations to interchange with other railway companies. Class A route relations should operate with less than 20% of route mileage on trackage rights.

With the approval of the FSA community, a Class A railway can become a Class AA railway and serve up to six (6) zones. (To ensure realistic competition, no freight companies are permitted to serve more than seven (7) zones.) To move from a Class A to a Class AA railway, the chairperson and co-chairperson must identify an additional co-chairperson to help organize the company. Similar to Class A railways, each of the chair/co-chair's states must be located along the mainline and must each be located in a different zones. The three chairs/co-chairs are responsible for creating a network plan with tentative agreements from each affected stateowner, which would then be presented to the FSA community, with routing and company name approval to be voted on by the FSA community as a whole. "Mergers" with Class B railways are also permitted as part of plans to create a Class AA railway. Class AA route relations should operate with less than 10% of route mileage on trackage rights.

Passenger railways are structured similarly to freight railways, except no interstate passenger routes are organized by individual stateowners.

Class D-P passenger railways are commuter railways that generally serve a single major metropolitan area, or serves several metropolitan areas in a single state. These are organized at the state level, as applicable; these may operate over freight railway trackage rights or operate on dedicated right-of-way. Permission from freight operators is recommended, but not required unless operating on a segment of single-track railway. These do not count against chair/co-chair caps. Similar to Class D freight railways, Class D-P railways should be limited to a single state or a total length of 300mi/500km, whichever is less restrictive.

Class C-P passenger railways are considered independent of the national passenger rail company and provide supplemental regional passenger service, which may include high-speed rail. Class C-P railways are organized at the regional level and can use freight railway trackage rights for non-high speed rail service. Regions have significant latitude in organizing, naming, and planning Class C-P routes, including operating into adjacent zones as needed.

High-speed rail routes are considered any service that operates at over 110mph (~180km/h). These railways must be electified and grade separated from freight traffic and other ground crossings (streets, paths, etc.).

As per the results of the 2020 advisory survey, there is no national high-speed rail network and the only national low-speed network is provided by the national passenger rail company; thus, Class C-P railways should not serve more than two zones (although, similar to Class C freight, a Class C-P railway does not "serve" a zone unless it has more than 100mi/160km of track in said zone).

The only Class AA-P company is the national passenger rail company, operating nationwide almost exclusively on freight rail trackage rights. These operations are low-speed and low-frequency, with only one or two trains operating daily per line. To ensure both fairness and forward-compatibility with all future states and stateowners, route planning will not occur until four Class AA railroads are identified and approved. At that point, interested stateowners will be asked to submit a list of stations they wish to be served by the company and a vote will be held to determine the name of the new company. The FSA Inter-State Coordinator and/or the FSA Project Coordinator will work with each region to create a national network plan to ensure as much coverage as possible. As new stateowners come into the project, additional stations can be added and routes modified as needed on an ongoing basis.

States are permitted to restrict or deny access to any company who wishes to operate in their state; however, once access is granted for a particular route, it cannot be rescinded. This includes changes in ownership of the state itself: existing routes will be covenanted into the state's new ownership in the event of stateowner turnover. Additional routes would require a separate agreement between the stateowner and the railway company (co-)chair.

Even if permission is granted to the railway company, each stateowner maintains the right to determine intra-state routings, station locations, and other details specific to that state unless explicitly permitted by the stateowner.

Any efforts to "barter", "bribe", or otherwise extract concessions from either a stateowner or a railway company beyond what can be considered reasonable compromises in regards to routing, service, stopping patterns, or other considerations directly related to the mapping and operation of the railway is expressly prohibited. Any violations or attempted violations of this policy should be presented to the FSA Inter-State Coordinator for investigation and remediation.

If a state is available (a "green" state), chairpersons can include a route through said state provided stateowners on each side of the available state agree. If the state already has railroads mapped, the new connection can be mapped as usual; if the state does not yet have any railroads mapped, a route relation can be applied to an untagged line that does not show up on visible layers of the map itself (but would appear on relation queries and wiki multimaps).

If a state is unavailable but vacant (a "gray" state) or inactive (a "yellow" state), corridors and routes are not permitted to be planned or mapped until the status of the state changes. A stateowner who does not respond to any outreach by (co-)chairs should be considered inactive.